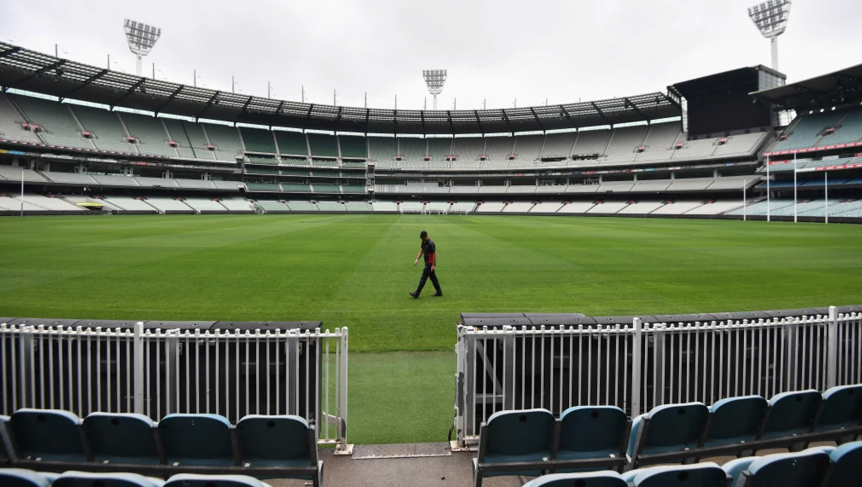 Hundreds of kilometres apart, Michael Salvatore and Adam Lewis have both experienced their own haunting Field of Dreams moment as they tend to the waiting turf of two of Australia’s great sporting cathedrals.

In normal circumstances, this time of year we would see the MCG and the SCG a hive of activity as the AFL season launches into life. Instead, with coronavirus halting play, pared-down crews of ground staff are keeping the hallowed surfaces in a perennial state of readiness.

That has allowed Salvatore, the MCG’s executive manager of turf, and Lewis, the curator at the SCG, rare moments of solitude amongst deserted stands that would normally be pulsing with the sounds of winter football.

“What was surreal was that I was in there the other day and it was dead quiet. I was standing in the middle of the Melbourne Cricket Ground and there wasn’t a soul there. That was like a movie,” Salvatore said.

Lewis took a deep breath of his own as he surveyed Sydney’s famous old ground, now in a state of tranquil hibernation.

“I have … and it’s quite eerie,” Lewis said. “We’ve turned lights off and turned refrigeration and everything off, so it’s very quiet. It was almost silent. These are very, very different times.”

Curators occasionally get told they are paid to watch the grass grow and the jest has more than the usual element of truth now. Oddly enough, they want the grass to grow slower than ever before as they try to nurse it through a period of inactivity and have it ready to play on at less than a day’s notice.

An absence of sport doesn’t equate to no work for the curators and their teams. The goats are being kept in their pens for the moment as both Salvatore and Lewis keep their prized surfaces in pristine condition until the green light shines once again.

The fields can’t be simply left to grow wild, with the threat of fungus and disease always present and the cost and time of starting from scratch far eclipsing the effort of maintaining the hi-tech grass.

“With the shutdown, we’ve gone into a sort of holding pattern,” Salvatore said. “So it’s not inactivity but it’s reduced activity. Because we don’t have the wear-and-tear of three games of football a week, we don’t need the grass to be growing and recovering as fast.”

“We are trying to slow down its growth… it has to be ticking over and healthy… but we don’t want it performing as well as it could. There’s no traffic so we will have to be in there cutting all the time when we are supposed to be keeping away as much as possible.”

“It’s a situation where we could flip the switch and if they said there was football next week, we would be good to go. We’re not doing our usual practice, we’ve had to adapt like everyone else.”

The MCG was already marked up for AFL when the season halted. The SCG didn’t get that far as ground staff managed the transition between the summer and winter seasons, with the wicket square added another few degrees of difficulty.

But Lewis said they could feasibly have an AFL or NRL layout complete in half a day and be ready as soon as the leagues were ready to resume their short-lived seasons.

“We could play straight away. We are going to keep it maintained so that if anything does happen and they want to play, we are good to go,” Lewis said. “Unless we are told something different, that will be our attitude.”