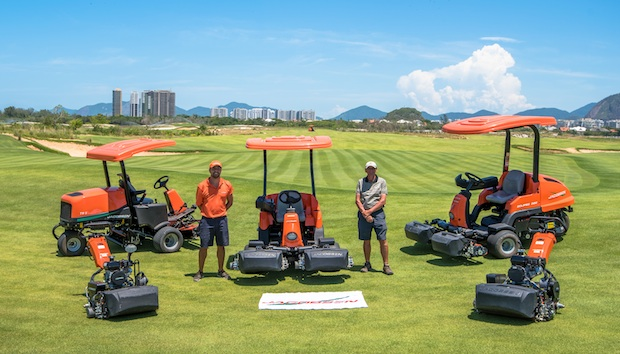 It’s the premier sporting occasion on the planet, watched by a global TV audience estimated at over 3.6 billion, and Jacobsen products will play their part as golf returns to the Olympics in Rio de Janeiro next year, after a 112 year absence.

The golf course has been constructed in Barra da Tijuca, a district of Rio de Janeiro that contains the largest number of Olympic Games venues and is located 7 kilometres from the Athlete’s Village.

Hanse was voted ‘Architect of the Year’ by Golf Magazine in 2009, the same year that one of his designs, Castle Stuart in Scotland, won the accolade of ‘Best New International Course’.

After a delay due to a customs-related issue with the irrigation system, construction began towards the end of 2013. Based on a typical layout that would be found in Australia’s sand belt around the Melbourne area, the course features natural vegetation, extensive bunkers, a lagoon and sandy rough ground lining the fairways.

The mix of grass species is an interesting one with Zeon Zoysia used extensively on tees and fairways, while SeaDwarf Seaside Paspalum is used on the greens. Both species are drought tolerant and the Paspalum is also saltwater tolerant, which is important as the quality of the irrigation water will be variable.

None of the grass on the course has been grown ‘in situ’ from seed; all the grass cover has been laid as turf or sprigs. Marcello Matte is the owner of Green Grass Brazil, who is responsible for producing the grass that has been used across the 35 hectare (85 acre) site. The Zeon Zoysia cultivar, explicitly for use on golf courses, has been developed by grass breeder David Douget of Bladerunner Farms in Texas, USA.

The planting of the golf course began in May 2014, using three different approaches; the majority of the Zeon Zoysia areas – tees and fairways – were planted using large rolls of turf, but some areas were planted using oblong shaped turf sods.

The SeaDwarf Seaside Paspalum used on the greens were all planted as sprigs. As well as being drought tolerant, Zeon Zoysia has low fertiliser requirements and grows in a dense mat, which helps with weed suppression.

Course Superintendent Neil Cleverly, a member of BIGGA, is the successful Englishman who landed one of the most sought-after jobs in the industry back in June 2013. With a portfolio that encompasses Europe, Asia and the USA, he is extremely experienced in the management of warm season grasses.

Commenting during a conversation with Golfdom magazine back in October 2014, Gil Hanse said,

“I didn’t meet him until after he was selected. He was interviewed at the GCSAA show in San Diego, which I was unable to attend. Jim Wagner from our company went down and was part of the team that interviewed him.

By all accounts Neal did a great job, he’s got a ton of experience overseas, primarily with warm season grasses, which was a bonus.

“Although he doesn’t have experience with Zeon Zoysia, which is the primary grass on-site, he’s well equipped to deal with it and he has been a Godsend. During the early parts of construction it was basically me and a couple of guys who work with me down there. Working without a project manager and trying to make sense of it all was difficult, and then when Neil showed up he immediately took over as project manager.

“He got very involved in the earth moving and quickly demonstrated what he could bring to the project. He is not only a great turf manager, but also an excellent project manager from the construction standpoint. So he has been the rock of the construction part of the project.”

It was back in the spring of 2014 that Jacobsen was confirmed as the preferred supplier of the mowing equipment. Commenting, Alan Prickett, Managing Director of Ransomes Jacobsen in the UK said,

“One of the deciding factors was that we have a local distributor in Brazil.
ProGolf has represented the Jacobsen brand in Brazil since 2012 as well as Ryan, Turfco and Smithco; three companies with whom we have excellent working relationships across the globe.

ProGolf’s core business is golf course construction, and they are working as sub-contractors at the Olympic course.

“It’s a tremendous accolade to be associated with the Rio Olympic golf course and, once again, we’re delighted to be involved with the Olympic Games as it continues a tradition for our business that goes back over many decades.

This was a particularly important win for us, as it marks the return of golf as an Olympic sport after more than a century, and it’s sure to be one of the high-profile events at the Games.

“Our Regional Sales Manager, Frederico Santa-Barbara, has worked extremely diligently in both the run up to our appointment and in the 18 months since. He visits the course at least once a week to ensure that everything is progressing as it should, and we have ProGolf on course full time in their construction capacity.”

“The Eclipse mowers are an important part of the package,” said Jacobsen’s Frederico Santa-Barbara.

“Neil and his team consider them to be the best greens mowers on the market; they are the only mowers with total control over the number of cuts per metre and the reels on the walking versions can be used on the ride-on machine, providing great flexibility.

The other key element is that there is absolutely no possibility of an oil spill on the greens, because these are hybrid machines and do not use hydraulic oil.”

By the time the first test event takes place early next year a total of 35 Jacobsen turf maintenance machines will be employed at the course. In the interim, Jacobsen’s Product Support Manager Andrew Echenique will be providing technical training for Neil Cleverly’s team and he will be part of a team of Jacobsen technicians who will be running the maintenance facility over the course of the event.

During the Games, the course will host two 60-competitor tournaments with the women’s event following the men’s competition over a two-week period. It will accommodate 2,500 spectators in grandstands with space for a further 17,500 around the course.

‘Legacy’ is an important word in Olympic circles and the Rio Olympic Golf Course is no different. The International Golf Federation (IGF), who successfully lobbied for golf’s return to the Games, will organise the two events and are responsible for ‘promoting a positive legacy from the Olympic Games.’

Post-Games the course will be the only 18-hole public facility in Rio de Janeiro and Brazil. The Clubhouse will become a multi-purpose venue used for public meetings and social engagements, while the driving range and golf academy will be used for golf practice, instruction and education.

Perhaps the most important legacy will be the implementation of a youth development programme dedicated to providing young people of all backgrounds opportunities to continue their education and develop their character through golf. Funding from the Brazilian Olympic Committee to the Confederation of Brazilian Golf will be used for junior golf initiatives around Brazil.

From an ecological and environmental perspective d

egraded land will be restored by the creation of green space with local access. The venue will be certified as environmentally sustainable by creating a watershed and providing attenuation, natural filtering and water treatment.

The biodiversity of the area will be enhanced by managing the water run-off, thereby conserving the soil structure and restricting erosion. Improvements in the ecosystem will increase native plants and encouraging the local wildlife.

Finally, the return of golf has the potential for increased awareness and interest in the sport, not only in Brazil, but across the globe; increased accessibility to play due to the public nature of the 18-hole course and, eventually, increased participation in golf.

At the IGF Olympic Golf Forum during the 2015 PGA Merchandise Show, held in Orlando, FL in January, Peter Dawson, President of the International Golf Federation said,

“We began this project of bidding for golf to return to the programme of Olympic sports because so many small countries, small in golfing terms, really needed some help to grow the game …. The growth of the game is worldwide and the inclusion of golf in the Olympic Programme is the biggest ‘grow the game’ opportunity we had and that continues to be the case.”

“With just a year to go before the Opening Ceremony in Rio, everything now looks in place to ensure that golf’s return after a century’s absence, will have a positive influence on the game. From Jacobsen’s perspective we are delighted to be involved, in some small way, in this historic event.”

To view more images of Jacobsen’s involvement in the Rio Olympics re-intriduction of Golf, head to turfmate’s facebook page.