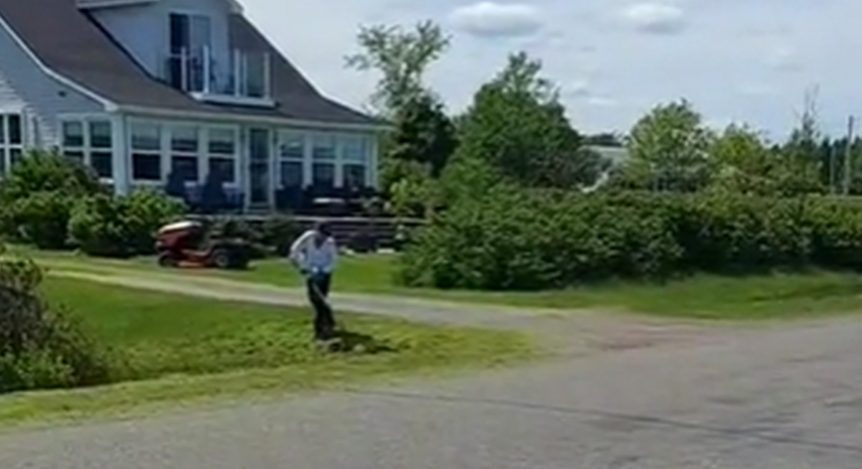 There’s something magical about a local, low-key wedding… that is, unless your “salty” neighbour decides to destroy the beautiful moment by trimming their lawn as you attempt to exchange vows.

A video shared on Reddit’s ‘I Am A Total Piece of S–t’ thread has captured this exact incident, and begins with footage of the bride being walked down the ‘aisle’ to her waiting groom.

“The second the bride’s song came on and she walked down the aisle this KAREN decided to PURPOSELY mow her lawn and yell at us to ruin the wedding,” the caption on the video reads.

We then see the couple exchanging vows; cut back to the neighbour, and she is mowing her lawn, making a lot of noise.

The neighbour is dressed in sunglasses and a hat and she briefly looks across the road at the event. There isn’t any footage of her yelling, but it may be that it wasn’t captured on film.

1,400 comments have been posted by Reddit users, including one who writes: “She’s just salty that she didn’t get an invite.”

“That’s a level of pettiness I one day hope to achieve,” adds another.

“You really don’t, those people live their whole lives for hatred, truly obsessing over their Neighbor and all their imagined grievances,” one person comments.

Another writes: “I’ve learned that just because everyone ages doesn’t mean everyone matures. Some people hit an age where they quit trying to grow mentally and emotionally.”

“People like that can’t bear to see others happy,” adds another.

One Reddit follower shared their own experience of accidentally ruining a wedding in a similar way.

“I had an Airbnb next door. I was mowing the lawn on a Saturday afternoon with my ear buds in. As I finished the back yard, I noticed people had shown up and were conducting a very small wedding. I felt terrible and wished someone had said something to me beforehand,” the recall.

Another commented the couple had to expect some level of noise as they chose to have their wedding on the front lawn of a residential home.

“She’s way too old to be destroying her lawn to make a point,” adds another.