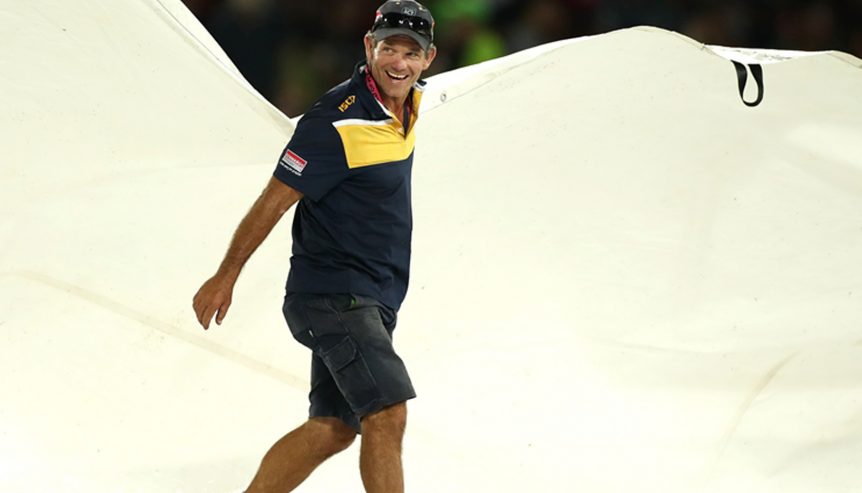 Long-serving Manuka Oval Head Curator Brad van Dam has announced the most recent summer of cricket will be his final, making the tough decision to step away from his beloved role to spend more time with family.

After almost three decades in the turf industry, Brad has been preparing the Manuka Oval pitch for the past 13-years and will leave behind an indelible legacy highlighted in 2019 when the venue became the 11th Australian Test match venue.

Brad said it was an honour to have been given the opportunity to be Head Curator by Cricket ACT and Manuka Oval back in 2008.

“It was a very hard decision for me to make however it was made easier due to the reason behind my decision. It is a lifestyle choice and wanting to spend more time with my family,” van Dam said.

“As Manuka Oval has evolved over the years it has certainly taken me along for the ride. There have been many firsts at Manuka Oval which I have been lucky enough to be involved in.

“I feel I have achieved what I dreamt about as a curator and more during my time here. The ACT Government has played a massive role in my development as a curator due to the many upgrades of Manuka Oval over the years. These developments and upgrades to the oval has seen the ACT Government attract more and more cricket matches as well as AFL which has given me more opportunity to grow and learn.

“What I feel most proud about is the work colleagues and friends I have made along the way. I am grateful to all the staff that I have helped develop over the years and who have gone on to bigger and brighter things. To my current team at Cricket ACT who I am leaving, you are extremely hard-working and passionate which I will miss.

“I also want to thank everyone at Cricket ACT past and present who made coming to work so much easier due to their passion and enthusiasm for cricket. A couple of people I want to personally thank are former CEO’s Mark Vergano and Cameron French and outgoing CEO James Allsopp who all entrusted me with role as Head Curator and gave me the free reign I needed to get the job done.”

Brad got his start in the industry working as an apprentice at Sydney University before becoming Assistant Curator at the Sydney Cricket Ground in 2003. He was recruited to lead the Manuka Oval grounds team in 2008 and fast became an integral part of the Cricket ACT family and broader cricket community.

The role of Manuka Oval Head Curator has evolved significantly over Brad’s time at the helm, growing the international content at the venue from hosting one Prime Minister’s XI fixture each year to delivering the most recent ‘biggest summer in Canberra’s history’ which included a One Day International, T20 International and a 13 Big Bash matches including three out of the five finals.

ACT Chief Minister Andrew Barr said. “The ACT Government congratulates and thanks Brad van Dam on his illustrious role as Head Curator for Manuka Oval for the past 13 years,”

“The role Brad and his team have played in preparing Manuka Oval to the world class standard it is, is a direct result of Brad’s commitment, passion and dedication to his work.

“Preparing for Canberra’s first ever Australian One Day International in 2013, BBL Final in 2015, Sheffield Shield Final 2014, the rebuild of the playing surface in 2013/14, Cricket World Cup 2015, Women’s T20 World Cup 2020, countless cricket matches at the international, domestic and local levels, along with AFL premiership and AFLW matches are just some of Brad’s significant achievements during his time as Head Curator.

“I wish Brad the very best for the next exciting chapter.”