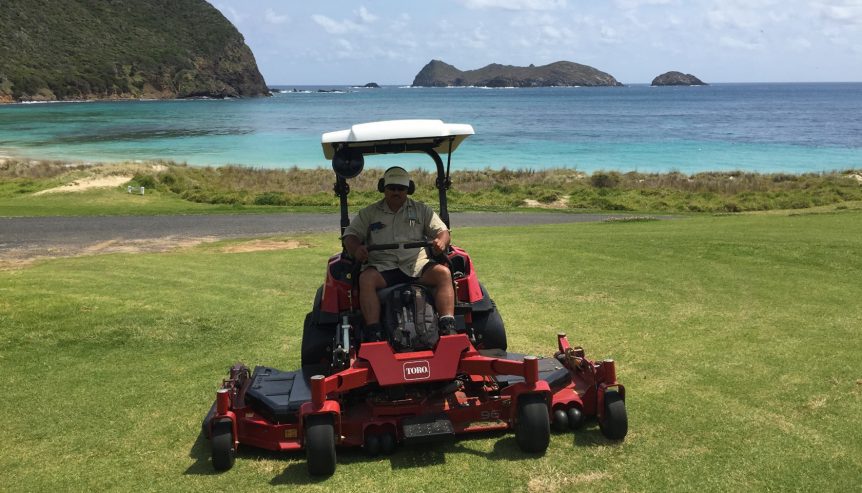 “Next day delivery isn’t bad considering we’re a little dot in the middle of the ocean!” laughs Jim McFadyen, the Asset Manager for the Lord Howe Island Board.

Lord Howe Island is located in the Tasman Sea between Australia and New Zealand about 780 kilometres northeast from Sydney. The government board that Jim works for have just purchased their first Groundsmaster 7500 from Toro and aside from the benefits of the machine itself, Jim says the sales and service they’ve received from Toro Australia have been incredible.

“I have a very open mind about brands and have no allegiance to any particular one. But, being a keen golfer, I’ve noticed on some of the mainland courses we’ve played on and even international courses, that the vast majority of them run Toro products. Some of those clubs don’t have an issue with budgets so they could really get any machine they like!

“We’ve dealt with Mark Johnson at Toro and he was unreal! He even flew out here to do the handover. Lord Howe it the most expensive domestic route in Australia and that was all included in their price, so it was certainly fantastic to get a professional handover and professional familiarisation. We’re really rapt,” says Jim.

The Lord Howe Island Board is responsible for asset management all over the island, including the air strip, a hectare-sized sports oval and all the grassed areas. Jim says that he and his team need to look after all those areas as efficiently as possible, which is no small task considering Lord Howe Island a gets about two metres of rain a year and is quite warm and humid, making it the perfect environment for fast-growing turf! 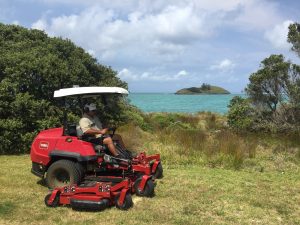 “We’ve got a team of 12 workers that go out and maintain the assets on the island – including lawns and grass areas – and there’s a hell of a lot of grass along the estuary. We’ve never had Toro ride-on mower products before, but we already had half a dozen walk-behind mowers from them, so this was a well-researched experiment to up-the-ante a bit.

“Our previous equipment has been 72-inch and the Toro is a 96 inch, which makes it a lot quicker – twice as quick as the other machine we’ve still got! When we first got it back in October last year, I tried it first and then our staff tried it and they all came back straight away singing its praises. Not just for the speed and the extra width, but the comfort of the machine. It’s zero-turn, your elbows are supported, your back is straight and it’s rear discharge, which ticked a lot of boxes for us.

“Now, we always have the Toro out first and if we have enough staff to send a second one out, then they’ll have to go on the old machine but it’s always a bit of a rush to jump on the new one!” 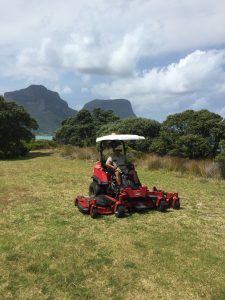 Jim explains that while their previous machine and supplier did quite a good job, they had challenges getting parts and the machine was costing them a lot of time in maintenance. Generally, all their parts had to come from the States, sometimes taking three to six months to arrive, making Toro’s next-day delivery of parts even more impressive.

“Toro have been very supportive and very eager for our business, which has been nice. And the back-up service is unreal, it sets them apart from everyone else from what I can see at the moment,” says Jim.

The Toro Groundsmaster 7500-D Series is available through Toro Australia and their dealers. Find out more today.