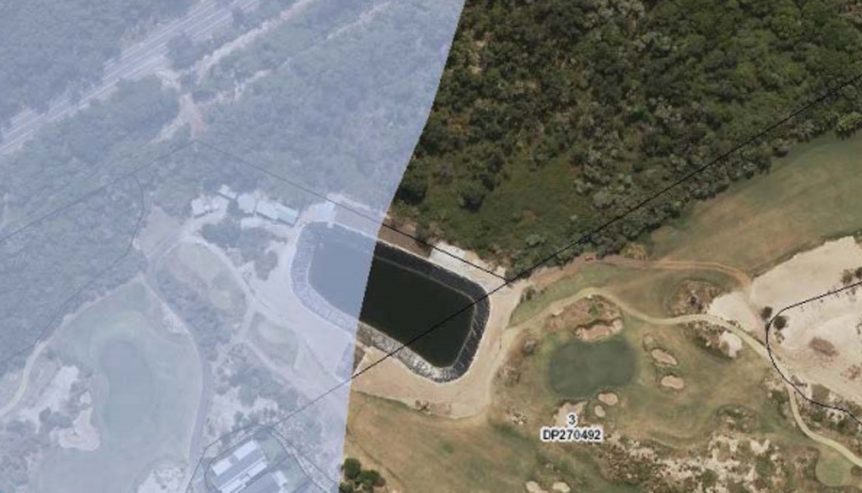 Magenta Golf Management Pty Ltd has applied to Central Coast Council for approval to use a reconfigured irrigation lake for the day-to-day maintenance of the golf course and to treat residual biosolids removed from a previous lake.

The decision to lodge the DA came after discussions and meetings between Magenta Golf Management and Council regarding Council’s concerns about the confi guration of the lake and the treatment of biosolids onsite. Treated water is received by the irrigation lake directly from the Toukley Sewage Treatment Works on a daily basis.

The lake acts as a settling pond, and the waste water received is diluted with fresh water and used to irrigate the golf course.
According to a Statement of Environmental Effects (SEE) submitted to Council in support of the application: “The irrigation lake provides the only external source of water for irrigating the golf course and is therefore fundamental to allowing the land to be used for recreational purposes. “The golf course is the major ancillary use to the surrounding residential and tourism development. “Removal of biosolids from a safe cell and their subsequent treatment and stabilisation will enable the material to be utilised over parts of the golf course, which will further enhance the condition and overall appearance of the course.”

As Central Coast Council was of the opinion the proposal would have little or no environmental impact, public notification was not required. The original irrigation lake was constructed as part of a 2003 DA that was approved by the NSW Minister for Planning in 2004 (the Lake Consent). The DA was submitted for approval at the same time as the Stage 1 Masterplan DA for the integrated tourist facility, now known as Magenta Shores.

The Lake Consent provided for the construction and operation of the irrigation lake to store and re-use reclaimed water from the Toukley Sewerage Treatment Plant for irrigation of the approved golf course. Investigations in 2016 revealed that the liner of the irrigation lake was failing and steps were taken by Magenta Golf Management Pty Ltd to replace the liner and enlarge the capacity of the lake. The new, enlarged, 3,635 square metre lake was constructed generally in the same location as the previous lake, adjacent to the 12th fairway, and approximately 60 metres to the nearest dwelling at 24 Edgewood Pl, Magenta.

JM Environments prepared a report on options for the disposal of the biosolids from the former irrigation lake. The preferred option was to construct a safe cell 120 metres to the east of the lake beside the 13th fairway. All works were completed in 2016. In November 2017, Council wrote to Magenta Shores Golf and Country Club Ltd raising concerns about the construction of the new lake and disposal of the biosolids in the safe cell. Following a series of discussions and meetings, a decision was taken to prepare a DA for Council approval for the use of the new lake and on-site treatment of the biosolids.

Once treated, it was proposed to use the stabilised biosolids on parts of the golf course. A copy of a management plan for the operation, on-going management and maintenance requirements of the lake were submitted with the DA. The Operations and Maintenance Plan detailed the monitoring and management requirements for the lake and aimed to ensure all activities associated with the lake do not damage the overall facility. Use of water from the lake was defined as a “water reticulation system” and the treatment of the biosolids formed part of a “water treatment facility”.

Below ground works involved the treatment of the biosolids in-situ and then the removal of the material for use on the golf course. The excavated area will then be backfilled with surrounding sand and topsoil and restored to its original level. Once the safe cell has been removed, the liner is proposed to be disposed of at the Buttonderry Waste Management Facility. JM Environments (JME) were engaged to assess disposal options for the biosolids within the lake. JME estimated that the former lake had an area of 2,800 square metres and the depth of biosolid material was approximately 0.2 metres, equating to 560 cubic metres of wet biosolid. JME collected biosolid samples, had them analysed in a lab and compared the results against relevant guidelines.