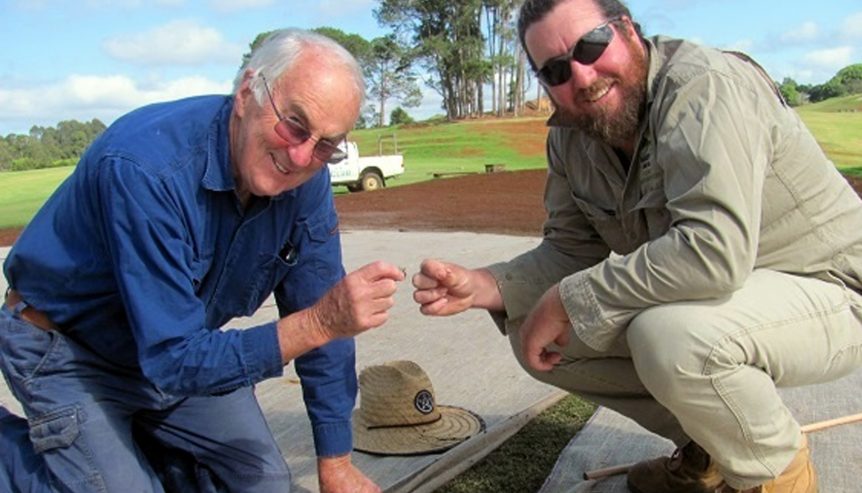 The historic event will also mark the opening of the Steve Porter Crossing – a new bridge approaching the First Green on the pioneering Porter family’s land, which was combined with the adjacent Armstrong farm to create the golf course and Maleny Community Precinct.

President Jeff Kruse said the club had faced many challenges since plans to establish a golf club in Maleny gained traction in 1999 and owed a great debt to his long-serving predecessor Dr Max Whitten whose efforts were rewarded with a Queensland Government Sports Volunteer of the Year award in 2015. “This golf course would never have been built had it not been for the grit, determination and unwavering leadership provided by Max who only stepped down last September after 19 years as President when the finishing post finally came into sight,” Jeff said. “This day marks the end of the club’s rather long beginning and start of a bright future as the home of golf in the Sunshine Coast Hinterland – and an exciting focal point for other sporting and community pursuits such as cross country running and astronomy.”

The quality course, serviced by a top-drawer maintenance facility, was largely constructed by volunteers supported by local contractors, Bernie Porter and David Lowden, together with strategic input from professional golf course shapers. The course covers about 25 per cent of the Maleny Community Precinct – the rest being devoted to other sports, effluent disposal, heritage, walking paths, rainforest and wetlands. Jeff said construction had started in 2014 with a total budget of around $1.6 million, following extensive community consultation over the precinct.

“We certainly appreciate the pivotal financial support provided by the Sunshine Coast Council, with whom we have developed a great working relationship, as well as absolutely essential grant assistance from both the State and Federal Governments,” he said. “Our Superintendent Mick McCombe has really worked miracles with volunteers and contractors to oversee the transformation of dairy pastures and some dense weedy patches into a quality course. In the process he won two national and one state award for excellence.”

Golf Australia has recognised that the future of golf lies in quality community golf courses like Maleny’s located in regions with mild climates, an abundant water supply and proximity to urban areas free from the severe land-use pressures being experienced in our larger cities.

The Official Opening will commence at 12.30pm and the formalities should be completed by 1.30pm.

Social golf will resume after 2pm but bookings are recommended.