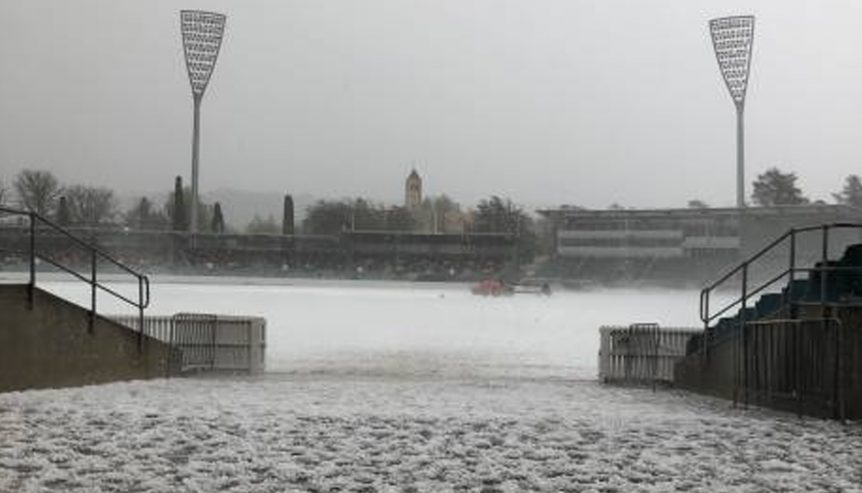 If you were dreaming of a white Christmas, it finally came. Four weeks late.

The only thing missing was the sound of sleigh bells as a layer of white descended across Canberra on Tuesday.

The covers protected the Manuka Oval pitch from the hailstorm. Picture: Cricket ACT

Not that you would’ve been able to hear the sleigh bells. What with the sound of golf ball-sized hailstones smashing into your car, office, house or nearest Canberra Raider.

The Raiders were forced to shift their training indoors after they were interrupted by the deluge of hail.

It was their first day back from a 10-day training camp on the Sunshine Coast to flee the smoke from the NSW bushfires.

The AIS and Canberra Stadium seem to have escaped any damage, while Manuka Oval became a sea of white.

Much to the delight of the Queensland Fire, who are in the capital for a couple of WNCL 50-over games – the first against the ACT Meteors on Tuesday and then against NSW on Wednesday. The Meteors are also set to play NSW on Thursday.

Fire allrounder Jemma Barsby whipped up a home-made toboggan and proceeded to slide around the usually pristine Manuka outfield.

Manuka curator Brad van Dam had the covers down, which protected the pitch, and he was confident the WNCL games would go ahead as planned.

They could’ve even played on Tuesday night – provided the hailstones had melted in time.

Cricket ACT chief executive James Allsopp said there wasn’t any damage to the stands or facilities at Manuka – just a few dimples in the pitch.

“There’s certainly some dints in it – almost like a golf green.

“We’re still hopeful it will be OK for [Tuesday]. We know the wicket block’s going to be OK, but our biggest concern’s the outfield.

“We’re still hopeful it will be fine for the game tomorrow.

“Brad said we could play this evening if we needed to – just on the square because the outfield would be a bit more problematic given how much ice was on there.”