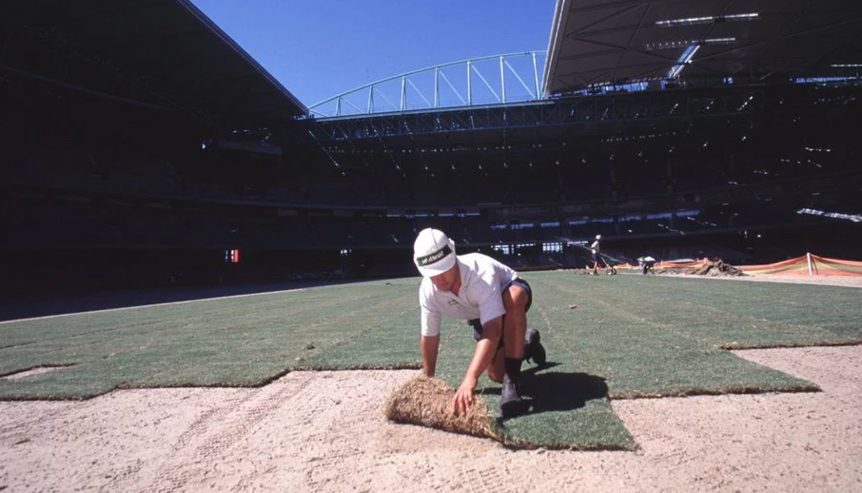 It was 20 years ago on Monday when Docklands hosted its first ever game of AFL.

That night, Essendon, a founding tenant of the venue, thrashed Port Adelaide, with Michael Long booting the first goal at the ground.

Football moved into the modern era that evening as clubs officially left suburban ovals to face-off under the roof.

Twenty years at Docklands: The 20 most memorable moments and biggest stories

The ground has had four name changes – from Colonial Stadium to Telstra Dome to Etihad Stadium to Marvel Stadium – in its time, but also been home to some of the best highlights from the past two decades of football.

Here is AFL.com.au‘s countdown of the most memorable moments and biggest stories at Docklands – from the good to the bad, the controversial to the heart-warming, to even the sand.

The brutality of the AFL was never more on show than when Hawthorn’s Jordan Lewis was concussed in a marking contest with Western Bulldogs opponent Jarrod Harbrow in round three, 2010. The frightening collision, as Lewis ran back with the flight of the ball into Harbrow’s path, was in a different era for concussion protocol, as Lewis was stretchered off the field before returning to the game.

Football went indoors for the first time when the Western Bulldogs and Brisbane Lions met in round two, 2000. The roof itself has been the cause of controversy across the venue’s history, though. There has been debate about when it should be closed or open on sunny days, while former North Melbourne coach Brad Scott lashed stadium officials in 2013 after rain poured into the ground while the roof was open.

Just as Richmond looked set to emerge from more than two decades in the doldrums, its star forward Nathan Brown suffered a sickening broken leg. It was in round 10, 2005, when Melbourne’s Matthew Whelan fell across Brown’s leg, snapping bones in a season-ending setback. Brown was one of the competition’s most brilliant players, and the gruesome injury, and graphic images of him on the getting helped from the field, remain etched in football fans’ minds.

The Docklands venue wasn’t without controversy as it came to grips with the demands of regular games. In the early days, the surface came under most scrutiny as the AFL struggled to maintain the grass on its new ground, with sand often replacing divots and complaints over its hardness. A new lighting and heating system has helped deliver strong results in the past decade.

It was Lance Franklin’s coming-of-age game. In Hawthorn’s elimination final win over Adelaide in 2007, it was Franklin who rose to superstardom. The brilliant young key forward booted seven goals in a best-on-ground display, including a clutch set shot from long distance in the dying moments that put the Hawks ahead to clinch the win.

Tensions flared in 2010 when Western Bulldogs forward Barry Hall and North Melbourne defender Scott Thompson engaged in a wrestle. Umpires had no control of the incident after Hall, who was on one knee tying his shoelace, was knocked over by Thompson twice. The Bulldogs’ full-forward responded by grabbing Thompson in a headlock. He escaped a suspension.

Essendon was on track for a record score in a blistering first quarter against Gold Coast in the Suns’ first season in the competition in 2011 – with the help of an unlikely star. The Bombers scored 15.4 (94) in the first term against the Suns, who were kept to one behind for the quarter. Essendon ‘slowed up’ from there, finishing on 197 points but running out 139-point winners, with inconsistent forward Kyle Reimers booting a career-best eight goals.

In a moment of madness that attracted headlines worldwide, Hawthorn defender Brian Lake was suspended for four games attacking the throat of North Melbourne forward Drew Petrie in round 16 2014. With Petrie lying on the ground, Lake grabbed his throat as Petrie tried to fight off the backman. The ugly incident drew huge coverage, including in America where the aggressive confrontation made national news.

Peter Riccardi kicked the match-winning goal after the siren in round 11, 2002 to hand Geelong a thrilling win over the Blues. But should it have been paid a goal? In a famous Docklands clash, Riccardi’s kick appeared to be touched by the man on the mark – a 19-year-old Simon Wiggins. The Carlton youngster ran straight to the umpire and claimed he had touched the ball with three fingers. The game is remembered for its dramatic ending.

Scott Lucas was not renowned for kicking on his non-preferred right foot but one pass sticks in the memory bank. Lucas’ snap in round 14, 2001, resulted in one of the all-time great grabs, with Bombers’ teammate Gary Moorcroft flying high over Bulldogs star Brad Johnson to pull in the screamer. Moorcroft’s magnificent leap was one part of a brilliant night for the small forward, who booted six goals for the night.

It was an historic day for the Cats in round six, 2007, when they steamrolled the Tigers by 157 points. The Cats’ score of 35.12 (222) remains the highest ever score at Docklands, with seven players booting three or more goals for the meeting. Geelong went on to win its breakthrough premiership that season while the Tigers’ effort was symptomatic of their season – Richmond finished last on the ladder.

In what was one of the biggest stories of the season in 2012, Carlton skipper Chris Judd came under fire for his ‘chicken wing’ tackle on North Melbourne’s Leigh Adams. The champion midfielder grabbed Adams’ arm as he was pinned to the ground in a tackle and twisted it behind his back, and was given a four-week suspension for the incident.

There have been plenty of great key forwards who have played at Docklands, including the likes of Franklin, Matthew Lloyd and Nick Riewoldt. But it is West Coast’s sharpshooter Mark LeCras who holds the record for the most goals in a game at the venue. In round 16, 2010, LeCras stunned onlookers with a 12-goal bag in the Eagles’ win over Essendon. Only two Eagles – Scott Cummings and Peter Sumich – have booted more in a game.

7. The Bulldogs break the streak

Essendon looked set to go through the 2000 season undefeated, after making the then-named Colonial Stadium its fortress in its maiden season. Until the Western Bulldogs deployed ‘the flood’ and handed the Bombers their only loss of the season in round 21. In a monumental upset, the Chris Grant-led Bulldogs shocked the Bombers to claim an 11-point win.

Essendon coach Kevin Sheedy’s ‘throat-slitting’ gesture aimed at West Coast’s Mitchell White in 2000 caused enormous controversy. As the teams were heading to the half-time break, an animated Sheedy headed for White with threatening motions after his run-in with Bomber Mark Johnson. After the game, Sheedy claimed that a “seagull” had flown into Johnson. The legendary coach was fined $7500 by the AFL.

5. The Geelong and St Kilda blockbuster

Heading into round 14 of the 2009 season, both the Cats and Saints remained unbeaten. This brutal and engrossing encounter lived up to the hype, and is widely regarded as one of the best games ever at the Docklands ground. The Saints won by six points, after a brilliant mark and goal late in the clash from ruckman Michael Gardiner. The competition’s clear standouts went on to meet in the Grand Final that year, when the Cats got the honours.

The Essendon skipper gave a Bombers fan the highlight of a lifetime when he hugged him following his match-winning goal against West Coast in round three, 2004. The curling kick from the boundary line sealed a famous Essendon victory and was one of Hird’s finest performances in the red and black, coming after a week of being in the spotlight after criticising the umpiring in Essendon’s previous game.

In terms of football drama it didn’t come much bigger than this. North Melbourne champion Wayne Carey faced off against his old side for the first time as an Adelaide player after his controversial exit from the club following his affair with teammate Anthony Stevens’ wife. The scandal tore the Roos apart as Carey sat out the 2002 season before crossing to the Crows. Few will forget the confrontations between Carey and ex-teammates Stevens and Archer during the round six, 2003, clash.

Football might never see a night like this again. In round 22, 2008, Franklin booted his 100th goal for the season. It was the most recent time a player has surpassed the magical mark and may remain the last, given the way the game has changed in years since. As Hawthorn fans ran onto the field to rejoice the moment, Carlton supporters waited anxiously for their turn as their own key forward, Brendan Fevola, closed in on his century of goals. ‘Fev’ started the game with 92 goals to his name for the season and booted seven against the Hawks, before the Hawks dropped players back to leave him stranded on 99 for the season.

This was a story that was bigger than football. McCartney’s return to the game in the middle of 2003 after he was a victim in the tragic Bali bombings in October, 2002, captured the attention of the nation. On a Friday night for North Melbourne, McCartney played a key role in the Roos’ three-point win over Richmond, kicking a team-lifting goal in the final quarter. He announced his immediate retirement after the match and was chaired off by teammates in front of an emotional crowd.