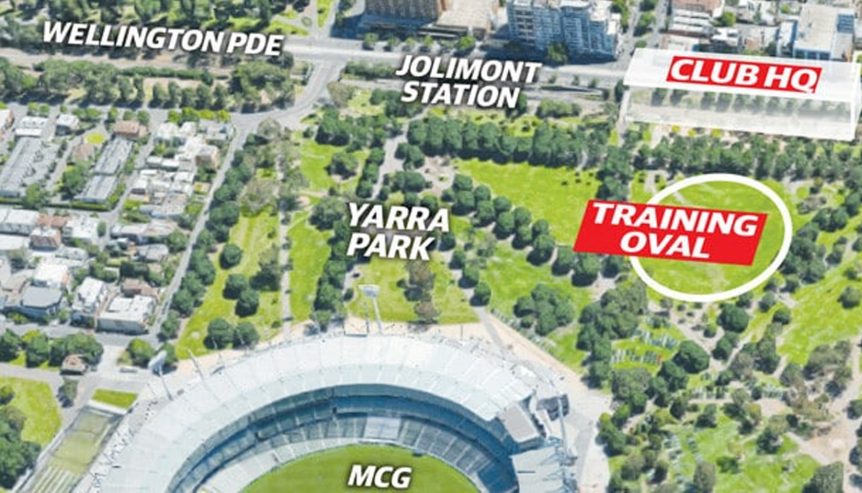 Melbourne Football Club has pitched a plan to build a new headquarters next to the MCG, with a training ground on Yarra Park.

The Herald Sun can reveal the ­Demons are eyeing a prized parcel of parkland, in the northeastern corner of the MCG precinct, for a full-sized football oval.

The bold proposal would also see a six-storey complex boasting an ­office wing, a world-class gym and medical facilities, built on top of rail tracks next to Jolimont Station.

An apartment block is ­expected to be developed next to the new HQ.

The state government confirmed yesterday it was in talks with the ­Demons about the ­potential development of Yarra Park and VicTrack land to ­accommodate a dedicated new home for football’s oldest club.

No formal decision has been made on the plan, but a government spokesman said: “Melbourne is the sports capital of Australia. We’re always happy to talk to organisations about how we can make our great sporting precincts even better.”

Melbourne chief executive Peter Jackson told the Herald Sun: “The club is looking at a number of options for its ­future training and administration facilities, and this is one of them.”

The MCG Trust parkland is currently used for AFL game-day parking, though parking capacity is expected to be reduced in coming years to help bolster security in the precinct.

Moving parking away from the stadium is understood to have support from many stakeholders and safety advisers, who argue it would create a “buffer zone” between queuing fans and vehicles.

It is understood the proposed Yarra Park football oval would be available for community use outside of Melbourne’s training sessions.

The new training base would be a massive coup for the club, as it looks to bring its football and administrative staff under one roof in the city’s heartland.

Melbourne would have to pay for the bulk of the development, but it would be contentious, with some locals certain to oppose a handover of inner city parkland.

The Demons are currently split between the MCG and AAMI Park, which they share as a training base with three other clubs — Melbourne Storm, Melbourne Rebels and Melbourne Victory.

Melbourne has trained at AAMI Park since 2010, but has outgrown the facility and wants to provide elite new equipment for its men’s and women’s football teams.

The club says the new training base and club HQ would help secure its future for the next 50 years, and provide elite facilities for the state’s best young footballers.

While the Demons have identified several possible sites for a new home, including a wedge of land next to Gosch’s Paddock, the Herald Sun ­understands the Yarra Park site is the preferred option.

The club hopes to lock away a venue for its new training base this year and start building as soon as possible. It is understood that the club approached the government with the Jolimont/Yarra Park plan following the announcement of Daniel Andrews’ sports funding bonanza, to include a $225 million upgrade of Etihad Stadium and another $242 million for community facilities.

Collingwood president Eddie McGuire said the move would “enhance the parklands” and potentially provide a running track around the proposed oval for inner-city community use.

McGuire said the facility would also be safe and well-lit for morning and evening joggers.

“The first thing people will say is ‘you can’t build something in parklands’, and you’ve got to take that on board because it is a beautiful park and beautiful to walk around in a natural area,” McGuire said on Triple M.

“But this is the opportunity to bring things together and not just look at it as a free-kick to the Melbourne Football Club or say ‘bloody AFL are stealing the parklands’.

“No they’re not, they’re going to enhance the parklands and make it more open for respectful for people to work out (and run around)

“You can put the facilities in to use at elite sports level and that means you can have a constant budget to keep it up-to-date and fresh and brand new for the whole community to use.

“It is a fantastic initiative.”

An agreement between the AFL and the Andrews Government will also pave the way for Melbourne Cricket Club to embark on a $1 billion redevelopment of the MCG’s Great Southern Stand in a decade.