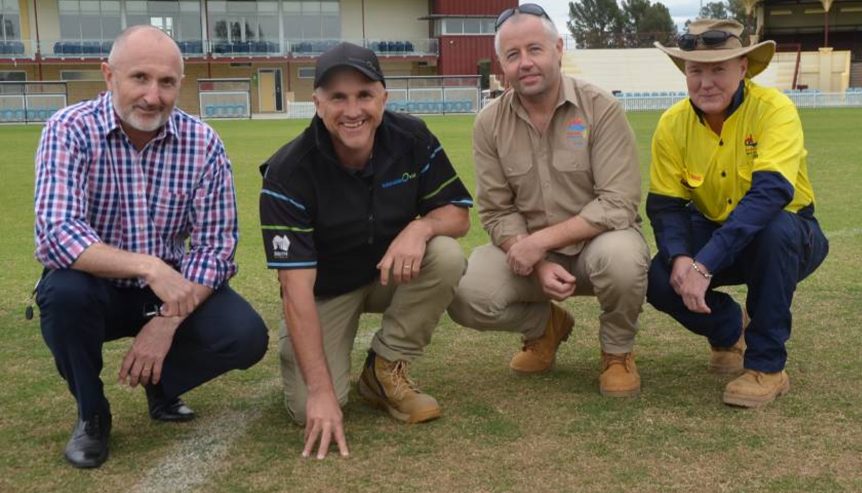 One of Australia’s leading curators has praised the Memorial Oval cricket pitch as being “spot on”.

He is Damian Hough who took over as Adelaide Oval curator from the legendary Les Burdett.

Mr Hough visited Port Pirie on Friday as a guest of the Solomontown-North Cricket Club led by Leigh Warwick and Lazro Kovacevic.

He walked to the four pitches in the centre of the oval with a keen eye, picking out virtually-invisible undulations which he said were only a minor issue.

“Keep doing what you are doing,” he told council parks and gardens leading hand and curator Phillipa Woolford.

He said it was “like she had spent a summer with Les Burdett”.

“The processes were the way we were taught. It reminded me of me,” he said.

“From a cricket side of things … there are simple principles that we follow. Pitch preparation is quite unique in itself.

From a cricket side of things … there are simple principles that we follow. Pitch preparation is quite unique in itself. They are following the basic principles. I would be proud to have it as my pitch.

“It varies – you have to got to adjust to what the weather is chucking at you.

“They are following the basic principles. I would be proud to have it as my pitch.”

Ms Woolford said the pitch at next-door Pirie West Oval was receiving some preparation for early October because cricket would be played there this season.

“The Memorial Oval pitch will probably take a little longer to prepare for this season,” she said.

“I guess that along the way you pick up tips from Damian and Les.

“The more you do it, the better you get at it – you just listen to the experts and, if you do what the experts tell you, you cannot go wrong.”

Mr Henderson said Mr Hough had a “wealth of information”.

“He said we could not be doing anything better than what we are doing so that was good,” he said.