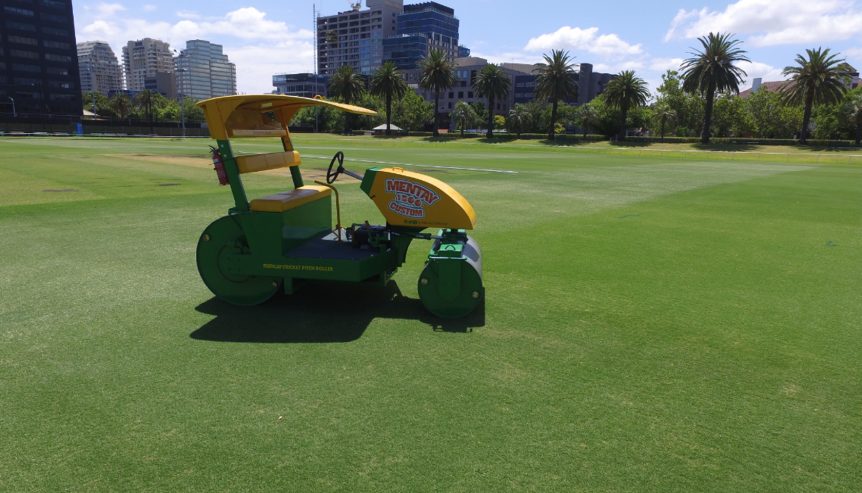 Mentay have designed a specialised big roller to meet the needs of Leisure Turf in Hong Kong.

The construction company has produced six Mentay 1200 Custom ride on rollers, at the request of Leisure Turf’s managing director Ricky Aitken, shipping one off to him in China.

“Mentay have been able to custom make or modify the rollers and other equipment that we have purchased from them, which is important given that every situation is different,” Ricky said.

The 1,200mm wide concrete rear barrel weighs in at 4,300kg with the opportunity to add another 800kg in loose weight.

He remarked, “The large diameter barrels, and the ease at which cross rolling can be carried out, are both highlights.”

“In Hong Kong we use soils imported from Thailand, which have very unique characteristics,” he said.

Specifying how the new roller would be used Ricky explained, “Generally, we do not roll for extended periods, we find that when the moisture content is correct, maximum compaction can be achieved after about six to eight hours of rolling.”

Ricky commended Mentay for their reliability and the lasting quality of their rollers.

“I have been using Mentay rollers all of my career, ranging from the Mentay 2000, Mentay Hydraglide, and now the Mentay 1200 Custom” said the Leisure Turf managing director.

Despite being skeptical about shipping such a heavy product overseas, Ricky said the entire process was a breeze, thanks to Mentay.

“Mentay took care of it all, they basically just put the roller on a ship and sent it direct to Hong Kong, it was as simple as that,” he said.

With both hand and foot steering, and being specifically made for cricket, the rollers are incredibly user friendly and specific to the task at hand, allowing Ricky and his team to ensure Hong Kong’s pitches continue to be of high quality.