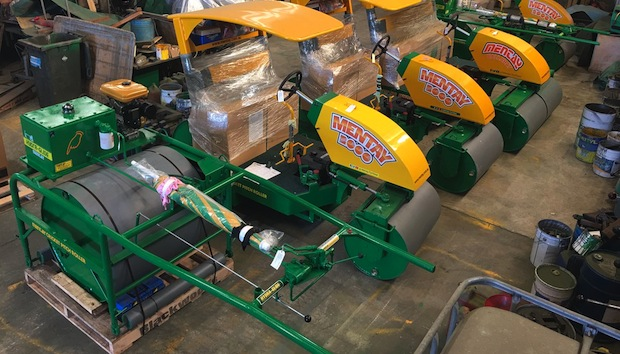 Mentay Australia may be a small family business run out of the humble rumble of Regional Victoria, but their product is being sought after across the globe.

Throughout July and August this year, Mentay have received export orders as far as Oman and Pakistan.

The Mentay Turf Crusher was purchased by an agency in Karachi, Pakistan for the Pakistan Cricket Board in Lahore.

PCB is the governing body for cricket in Pakistan, whose key responsibilities include the selection and composition of staff that develop and maintain the stadia throughout Pakistan.

A 20 foot freight container of Mentay turf cricket equipment was also shipped to Oman Cricket, located on the border of Yemen and the United Arab Emirates.

Mentay’s Maureen Menhennet says this equipment will be going to the Al Amerat Cricket Ground, based on the outskirts of Muscat, Oman’s capital.

Al Amerat Ground was the first international-standard cricket facility for Oman, constructed in 2012.

Since the game’s introduction to Oman in the late 1970s, Omani players had been competing on grassless, brown outfields and concrete strips covered in artificial turf to act as a wicket.

And last but certainly not least, two of Mentay’s Aqua Wizz Pedestrian Absorption Rollers were recently shipped across the pond to our neighbours in New Zealand for Westpac Stadium in Wellington.

Westpac Stadium is currently planning a resurface job that includes a synthetic turf perimeter around the oval, and an overall coverage of HG Sports Turf’s Eclipse Stabilised Hybrid Turf. The project will be completed by December.

The orders also haven’t stopped in our neck of the woods either; with a big order of three Mentay rollers also headed to North Sydney Council last month (pictured in Hero image).

Mentay’s turf cricket equipment has been shipped off to some pretty amazing places, and will be put to good use it seems in each location. Each overseas stadium has its own story and current undertakings, so it will be interesting to see how they take to the new Mentay machinery – we trust they will love it just as much as their Aussie counterparts!