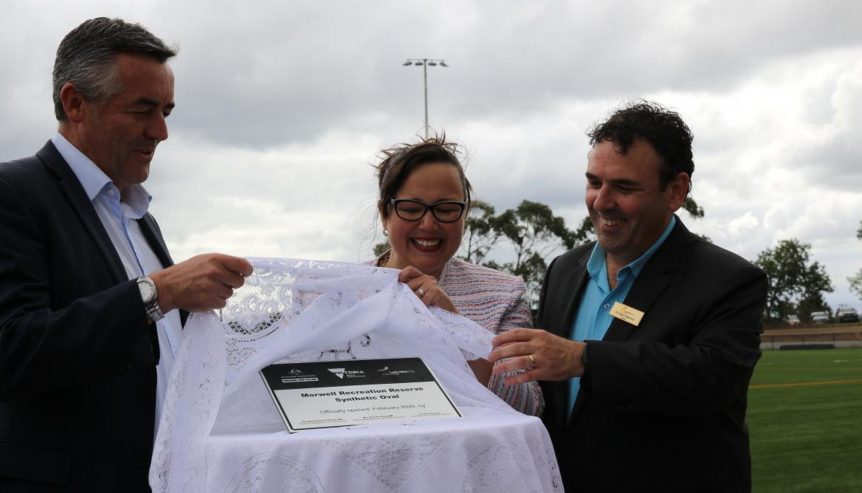 Morwell Recreation Reserve is the envy of AFL clubs and sporting codes across the state following the completion of a new $3.5 million synthetic oval at the multisport mecca.

“The synthetic oval adds another piece to what is already an elite precinct for the best under 18 Gippsland male and female footballers. It will provide a fantastic surface for the players to develop their fundamental skill set and stimulate growth for individuals and the club as they compete against the best under age footballers across the state,” Brown said.

“It shows great leadership and foresight to create a sporting precinct that will not only be the envy of many, but ensure that athletes from across Gippsland have the best opportunity to play at the highest level.”

Constructed by Tuff Turf, the synthetic project created 17 jobs throughout the build including work for local sub-contractors.

The finished product will enhance the precinct’s ability to host major events, such as today’s Hawthorn versus St Kilda bushfire recovery match and the upcoming Collingwood Marsh Series and AFLW double header, bringing in a raft of economic and visitation benefits.

“This magnificent all-weather, all-purpose centre will also increase participation in a myriad of sporting activities and really improve the offering for our elite clubs and athletes to hone their craft,” Latrobe City Council Mayor, Cr Dan Clancey said.“These upgrades complement a multitude of major recreation projects taking place across Latrobe City, positioning our regional city as a state and national leader for sporting infrastructure and events.”

It comes as part of a broader $9 million redevelopment of the Morwell Recreation Reserve and Keegan Street Reserve precinct co-funded by the Victorian and Australian governments and delivered by Latrobe City Council.

New netball courts, a shared cricket and netball pavilion and new lighting have already been installed at the ground as part of the package.