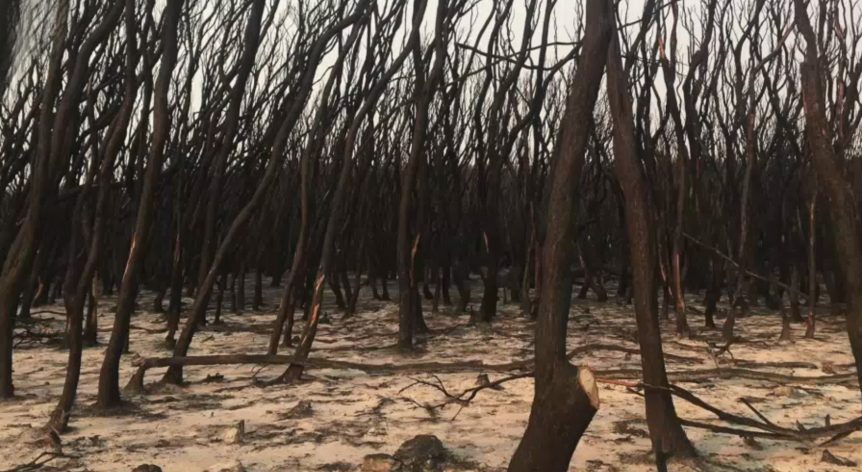 Two-and-a-half years after the catastrophic Black Summer bushfires devastated the Victorian town of Mallacoota, rainforest and coastal areas have slowly been coming back to life, with the help of a unique community nursery.

Set up to grow seedlings for replanting around the township and wilderness areas, the Friends of Mallacoota Nursery was established to regenerate native species obliterated by fire.

“We had an issue, we didn’t have any local plants, everyone was bringing in plants from different areas but the problem with that is it’s not local genetics,” Mr Watts-Parker said.

“Mallacoota has heaps of endemic and indigenous species that are found only here. We want to preserve what’s special here in the far east.” Mallacoota is home to a number of endemic and indigenous plant species.(ABC Gippsland: Rachael Lucas)

Working in conjunction with Envite, La Trobe University, DELWP Gippsland and the Friends of Mallacoota, the nursery has been able to source and salvage seed samples from the greater district to establish a flourishing native seed bank.

Seedlings are incubated in the nursery’s state-of-the-art hail-proof, temperature-controlled plastic glasshouse, before being transferred outdoors to await replanting in the community.

Some species wiped out by the fires were able to be recovered through seed samples donated by the Royal Botanic Gardens Victoria in Melbourne.

The shipwreck banksia (Banksia croajingolensis), a rare species of 400 to 500 plants restricted to a single drainage line in remote heathland south of Shipwreck Creek, was able to be regenerated and repatriated to its native area from donated seeds.

“It’s a clone of the plant that you take them from, so we try to do most things here from seed for that diversity.”

Mr Elliott said genetically diverse seedlings that had been dormant in the soil for many years could suddenly sprout after a fire.

For that reason, he said, it was important to wait for natural regrowth to take its course before introducing new plants to wild locations. “The Australian landscape is quite well adapted to fire, and things come back really well,” Mr Elliott said, of regrowth prompted by high rainfall over the past two years.

“A lot of these plants will go back into areas that are difficult for things to regrow.

“So we’re filling in the gaps where nature hasn’t quite made it.’

Revegetation has also been critical to preserving Mallacoota’s eroding coastline, which has been pounded by high seas in recent years as well as run-off from the bushfires.

“We worked on species that grow really rapidly and help stabilise the soil,” Mr Watts-Parker said.

“When you get a fire coming through, everything is vaporised basically.

“You get heaps of water running through the landscape, that puts excess nutrients within your waterways and that’s not too good for fish populations.

“So we wanted to put plants in that grow really quickly and stabilise the landscape.”

Foundations of a new forest

Working in harmony with natural regrowth, the nursery has put a lot of strategic thought into the targeted revegetation areas in order to create a succession effect.

It’s a symphony of sorts, engineered to inspire the re-emergence of different generations of plant species, insect colonies, birds and wildlife – all which create the foundations of a new forest.

One of the first native succession plants helping curb erosion along the coastline is the short-lived Kennedia rubicunda, which helps shade and harbour a new undergrowth of other plant life.

“We also wanted to promote biodiversity because you don’t just want a homogenous strand of one species,” Mr Watts-Parker said.