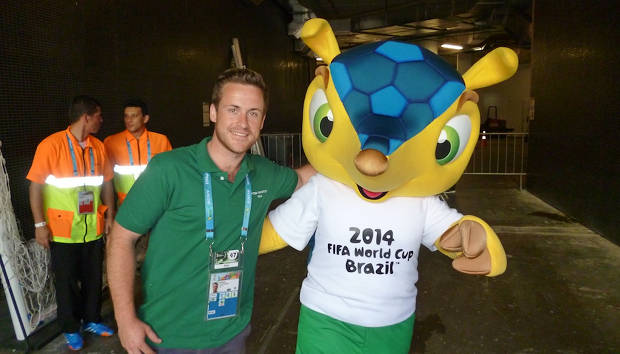 The company markets turf seed on a wholesale basis, so Troy’s main role will be to liaise with turf retail clients and provide technical support to them and their clients in the sportsground, golf, racing and other amenity turf areas.

Troy began his career in turf management in 2003 preparing wickets and sportsgrounds at private schools and local grounds around Melbourne’s inner east. In 2008 he moved to Etihad Stadium, under Gavin Darby, at the same time completing his Diploma in Sports Turf Management at NMIT. In July 2011 he was appointed Head Turf Manager at Dunedin’s newly-completed,  state of the art, fully roofed arena (Forsyth Barr Stadium). The pitch was the first in the southern hemisphere to use the Desso Grassmaster system and the first stadium in the world to grow natural grass under a fully enclosed roof.

The quality of the stadium and the playing surface has attracted great praise, as many Australian turf managers would know. It hosted four games of the 2011 Rugby World Cup, along with Super 15  and  local ITM Cup rugby, rugby league fixtures, A-league and International soccer, and concerts such as Elton John, Aerosmith and Paul Simon. Troy left Forsyth Barr earlier this year to move to the PGG Wrightson position back in Australia, but in between he was contracted by the STRI to provide turf consultancy at the 2014 FIFA World Cup in Brazil (see picture, Troy is on the left).

He was based on the perennial ryegrass Corinthians Arena in Sao Paulo for two months, overseeing the local turf management team for six World Cup matches, including the opening ceremony, the opening game (Brazil vs Croatia) and the semi- final between Argentina and the Netherlands. On his return from Brazil in July, Troy commenced his role with PGG Wrightson Turf, and will be based in Melbourne.