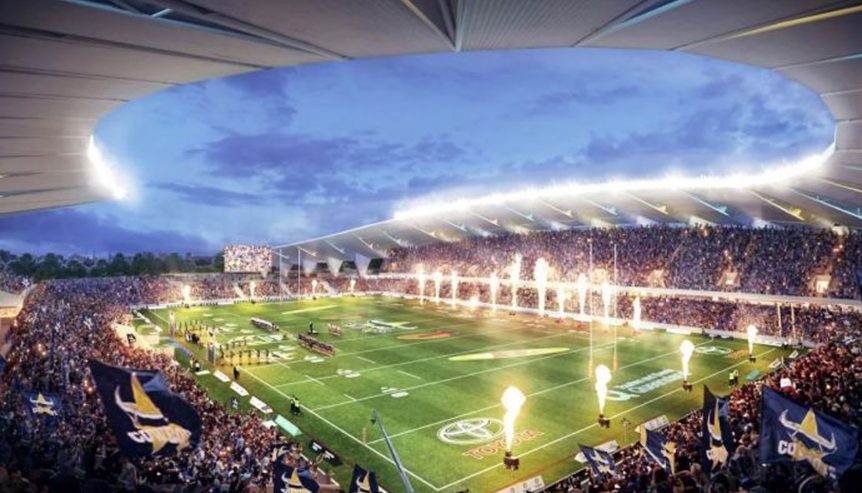 It has taken five years to build, $293 million and 2 kilometres of beer lines, but North Queensland finally has a new stadium in the heart of Townsville’s struggling CBD.

“Every time I see it, it gives me goosebumps — it’s a world-class stadium,” said rugby league great Johnathan Thurston.

The major infrastructure project has opened its gates after two and a half years in construction, becoming the new home of the North Queensland Cowboys.

Thurston was a champion of the stadium, using his victory speech at the 2015 NRL grand final to lobby for funding.

PHOTO: Johnathan Thurston with his four daughters at the unveiling of his statue. (ABC North Queensland: Lily Nothling)

The Cowboys star has been immortalised in a life-size bronze statue outside the complex.

“Not only does it attract the Cowboys home games, but hopefully we can attract world-class events here to the stadium — that’s what it was built for,” Thurston said.

Sir Elton John will christen the 25,000-seat venue with a performance next weekend.

The stadium was built with $193 million of Queensland Government funding and a $100 million contribution from the Federal Government.

It replaces the suburban Willows Sporting Complex which opened in the 1990s on the outskirts of the city.

PHOTO: Johnathan Thurston used the Cowboys 2015 NRL premiership win as an opportunity to appeal to then prime minister Malcolm Turnbull to fund a new stadium. (AAP: Dean Lewins)
The new stadium took 23,000 tonnes of concrete, 190,000 bricks and blocks, and 11,000 square metres of turf to construct.

“1,900 people who call North Queensland home worked on this project — that’s one in every 100 people who live in Townsville helped build this stadium,” said Sports Minister Mick de Brenni.

The venue will create up to 1,000 jobs during major events.

Two kilometres of beer lines have been installed to quench thirsty crowds.