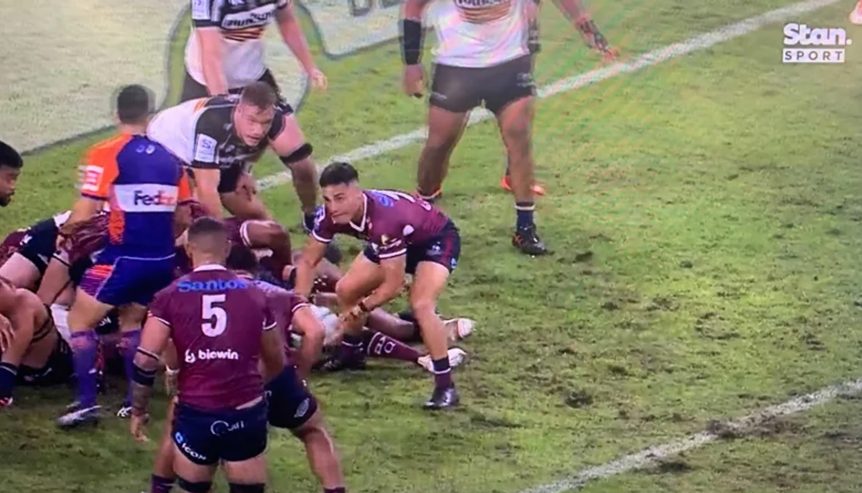 The NRL is confident the Suncorp Stadium surface will handle hosting eight matches in a little more than 48 hours after questions were raised about the ground’s capacity to recover from a bruising Super Rugby AU final.

The Reds’ heart-stopping after-the-siren win over the Brumbies on Saturday night has provided an unintended dilemma for the NRL, which is also closely monitoring the COVID situation in NSW as it tries to safely ensure all 16 teams will be able to get in and out of Brisbane for Magic Round.

The heavyweight packs of both Queensland and the ACT took visible chunks out of the Suncorp Stadium turf, requiring the referee to set scrums on different patches of the ground in the dying minutes.

The NRL scheduled the Broncos to play in Townsville a week before Magic Round to give the ground recovery time, but it was booked for the Super Rugby final after the Reds won hosting rights.

Having been forced to cancel Magic Round last year during the COVID suspension of the competition, the NRL said it planned to talk with stadium management on Monday before the three-day extravaganza starting on Friday.

“Any rugby game is going to tear up the surface, but our guys will work on it during the week and it will be a great surface for Magic Round,” Suncorp Stadium general manager Alan Graham said.

“It’s more about the structure of the field and when you get the size of those packs and re-setting scrums, there is always going to be some surface damage.

“Eight games is a big ask, but we’ve proved it can be done. It will be tired by the end of it as any field would be, but from a safety and player welfare point of view we don’t have any concern.”

Said NRL head of football Graham Annesley: “Everything is full-steam ahead next week. We’ll continue to liaise with the [Queensland] government and stadium over the next few days.

“They’ve got full-time ground staff and they’ll be working around the clock to get it in tip-top shape. We’ll deal with the stadium in the lead-up to the game as we normally would.”

The NRL’s inaugural Magic Round went off without any major issues in 2019 with South Sydney coach Wayne Bennett describing the Suncorp Stadium surface as “10 out of 10” despite his side playing in the last of eight matches.

The Tigers and Knights will begin Magic Round on Friday night as part of a double-header before a further three matches are held on Saturday and then again on Sunday.