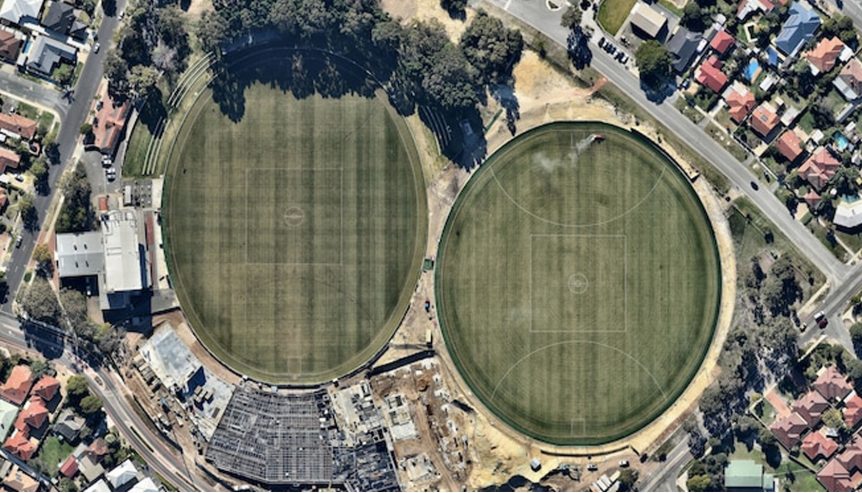 Adam Simpson initially hoped Perth’s new stadium would go close to replicating the unique, long and skinny dimensions of Subiaco Oval, where the Eagles had a 68 per cent win record throughout their history.

That was ruled out because of the need to play cricket at the multi-purpose venue. But as the side’s away form improved this season, the West Coast coach came to believe having a more normal-sized home ground had better prepared the Eagles for playing away.

West Coast finished the regular season with an excellent 7-3 road record, their best interstate return since they went 8-2 in their last premiership year in 2006. It was a marked improvement on last season when the Eagles had a 3-7 away record.

At 165m long and 130m wide, Optus Stadium is 10m shorter and 8m wider than Subiaco Oval, and is closer in dimension to most other grounds, including the MCG.

It is even closer to Etihad Stadium, which measures 160m by 129m.

From four visits to the two Melbourne venues this season, the Eagles boast a perfect record.

Subiaco has been reconfigured to near Optus Stadium dimensions, with the goalposts brought in at each end and the boundary line pushed up close to the fence on the wings to create a shorter, fatter ground.

Simpson said playing regularly at Optus Stadium had helped the team get used to playing on wider grounds, while the Lathlain development was a smart investment.

“To have the foresight to look into the future several years ago and develop the land that we’ve got and have the two ovals, it’s helped us,” he said. “We trained there pre-season, we feel more comfortable on the bigger ovals. As much as I’ve never claimed that the size of an oval affects the way you play, it hasn’t hurt this year to have those ovals available.

“Playing at home (at Subiaco) had so many advantages of a skinny, long ground that you couldn’t help but flip into that mode a little bit. Even training for a bigger ground in the west was difficult. We couldn’t find any. We’d train at Subi and train across the ground. All that sort of stuff is gone now.”

Defender Lewis Jetta, who was part of Sydney’s triumph over Hawthorn in 2012, is the only Eagle to have experienced winning an AFL premiership. It was the day he and Cyril Rioli sprinted along the MCG wing and into footy folklore.

Forward Liam Ryan has never played at the MCG, Daniel Venables just once and Willie Rioli and Tom Cole just twice each. While the quartet lack experience at the home of football, they have also never lost a game there.

In contrast, West Coast’s senior players all have losing MCG records across their careers.

The Eagles have a 5-6 record at the MCG under Simpson, but have not won a final there since the thrilling 2006 decider against Sydney.

Since then, West Coast have played four MCG finals for four losses.