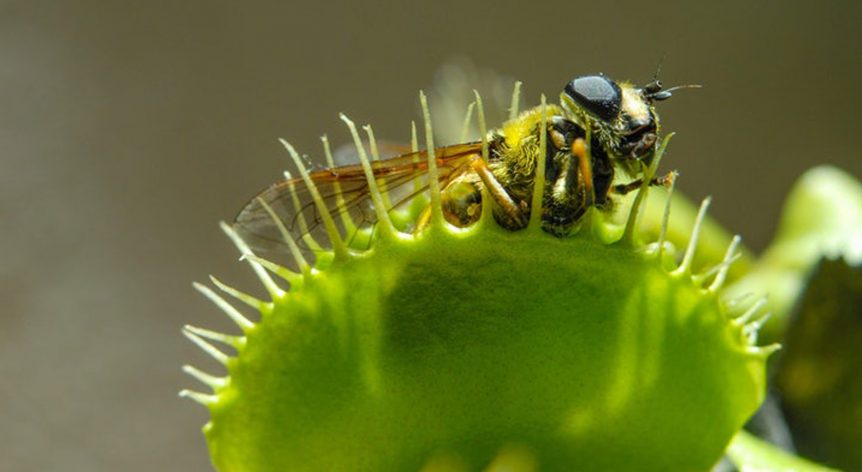 Ferns are nice and all, but they aren’t exactly dynamic. If you’re a person who demands action from your houseplants or wants truly deadly greenery, you should consider growing a carnivorous plant. They look pretty, and as a bonus, these houseplants-that-should-not-be violate generally agreed upon rules of nature. Venus flytraps and their lesser-well-known friends fight pests in your house and garden, and if you keep them alive, they mark you as the kind of unique oddball who chooses to grow a murder garden.

What are carnivorous plants?

There are more than 630 known species of meat-eating plants in the world, all of which shouldn’t exist if you ask me. They often grow in swamps that don’t have great amounts of nutrients in the soil and water, so these plants evolved the ability to get what they need from meat — usually insects, but sometimes lizards, frogs, and small rodents, too. Insect-eating plants catch their prey by luring them into pitfalls, onto sticky natural adhesives, or by springing traps on them like the Venus flytrap. (Underwater carnivore plants use suction, and ones that eat micro-organisms have other methods of attraction.)

The three easiest carnivorous plants to grow at home

Cape sundew, pitcher plants, and Venus flytraps are generally regarded as the easiest carnivorous plants to keep alive in the home, with the sundew being the heartiest, hardest-to-kill meat-eating plant. (If you’d rather grow a more challenging variety of carnivore plant because you are so great, I suggest a low’s pitcher plant. Native to Borneo, Nepenthes Iowii is a bowl-shaped plant with sweet nectar around its “lid.” The nectar draws shrews, who excrete into the perfectly placed toilet bowl pitcher below. Import some shrews from Borneo, and get to work growing your shit-plant, garden-master!)

Native to South Africa, the cape sundew produces large pink rosettes that glisten with a sticky mucilage. When a gnat, housefly, or mosquito touches down on a tentacle, they get stuck, and the leaf draws inward and surrounds it. Then they are slowly digested. Pitcher plants trap insects more passively than other carnivorous plants. Their vase-like leaves form a vessel for nectar. When an unsuspecting bug enters the kill-zone, they slip down the side of the pitcher and quickly find that the walls are too slick to climb back out, and the nectar doubles as digestive fluid. The rockstars of the carnivorous plant world,

Venus flytraps wait for something to innocently crawl across their “leaves” and then — SNAP — the trap closes and the digestion process begins. Murder-y!

These three plants may be the least difficult carnivorous plants for your home, but growing them is still likely to be a challenge. Their adaptations evolved in response to specific environmental conditions, so to keep them alive, you have to create something like their homes.

What kind of soil do I need for a carnivorous plant?

Regular potting soil will kill a carnivorous plant. The three species listed here need moist, highly acidic soil that is free of nutrients and minerals, like you’d find in a swamp. You can make your own soil by combining one part peat moss and one part perlite — or you can pick up some pre-made stuff.

Tap water and spring water will kill your bug-eating plants as quickly as fertiliser will. Water them with distilled water instead — it doesn’t contain the minerals that they hate — and water them a lot. The sundew, pitcher and Venus flytrap all come from swampy, humid places.

Consider a terrarium for some carnivores

These plants all do well in the enclosed, humid environment of a terrarium, as long as they get tons of light, but it isn’t necessary for them to thrive. Plus, they won’t be able to catch bugs in there, and isn’t that the point?

Carnivorous plants need lots of light — until they don’t.

For most of the year, most carnivorous species need lots of warmth and light, so put them in a window with no shade and let the sun shine in — until the winter. Flytraps and pitchers need a different environment during winter dormancy, so between November and February, move them to a dark, cool place, like a shed or basement. Sundew plants have no winter dormancy needs.

If parts of your flytrap turn black, it’s perfectly normal. You can trim out those parts carefully with scissors, but don’t cut out any green parts of leaves. Sundews are basically the same, although they don’t need pruning very often. Pruning rules for pitchers are the same as any flowers: Cut off dead flowers at the base of the stalk.

The big letdown with bug-eating plants is that they don’t need very much meat to live. They still do the whole photosynthesis thing for most of their nutrients, so it’s more important to their health to make sure they have the right amount of light, the right soil, and enough water than to have a constant supply of meat. That said: We all want to watch them trap and dissolve bugs.

Your pest-eating plant will almost definitely get all the bugs it needs if planted outside, but if it’s indoors, you might have to help it along. Feed them things they could catch in nature only: freeze dried mealworms, bloodworms, and crickets can be fed to all the beginner carnivores listed here.

With flytraps, feeding can be a tricky. The traps won’t close unless they feel something moving, so you have to help them along by jostling their little trigger hairs while the food is in there. You could use live worms or bugs — this will provide the best show — but don’t blame me if they escape the trap. Nature isn’t perfect.

Do not poke a Venus flytrap

Everyone wants to poke the flytrap and watch it close, but don’t. This isn’t because your plant will feel disappointed that your fingertip isn’t a juicy fly; it’s because each trap can only spring four or five times before it dies. It takes a lot of energy to do its trick, man.