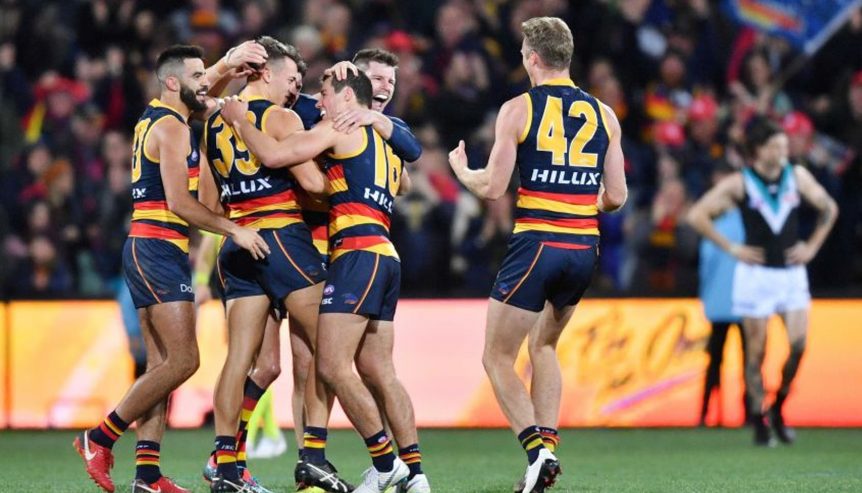 Plans for an AFL Showdown at Adelaide Oval in round two have hit a “snag” because South Australian border restrictions mean there may not be enough umpires and broadcast staff already in the state.

The potential problem could mean Adelaide and Port Adelaide pack up and travel to a hub in Queensland a week earlier than they had hoped.

SA Premier Steven Marshall has asked the AFL to allow the Power and the Crows to play a home Showdown once the season resumes in three weeks’ time.

He said potential issues with getting interstate commentators, camera operators and umpires into SA had only been identified yesterday.

“We’ve only identified this snag yesterday and I think the AFL has worked on putting forward a suggestion and I think that’s gone to the transition committee,” he said.

“It’s important to make sure that we do have the appropriate standard for an AFL game.

“We’ll look at the submission that they’ve put in and if we’ve got an announcement today then I’m sure we’ll make it.”

SA Health said it was also examining the proposal and could make a decision as early as today.

The Showdown would be the first game back for both clubs after coronavirus restrictions are expected to be lifted.

The State Government has already given Port Adelaide and Adelaide permission to resume contact training from Monday.

However, Crows chief executive Andrew Fagan today said the logistics of staging an AFL match would be complex while borders remained shut.

“It does require broadcasters and broadcast trucks and technicians and umpires to come in … hopefully the AFL and the South Australian Government can work through that,” he told ABC Radio Adelaide.

“If not, I guess we’ll be back up to Queensland a week earlier than we’d hoped.”