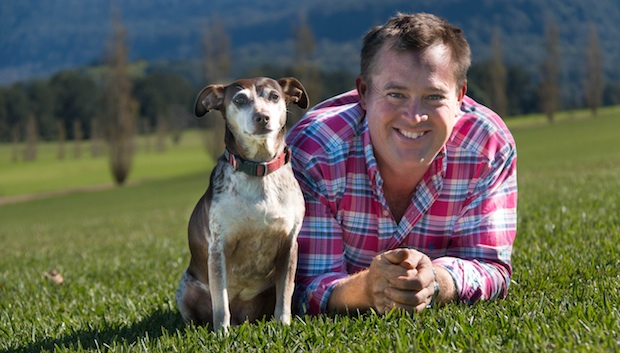 Starting his career in the gardening industry seemed like second nature to Hodges, as he has always loved the outdoors and his parents were keen gardeners.

It seems his passion for making someone’s backyard beautiful stems from that nostalgic love of being outside till the sun goes down.

There is something quintessentially Australian about playing until the streetlights come on, and Hodges’ creative mind and playful personality help bring this back to life in the garden.

We caught up with Jason to talk about his work with Lawn Solutions Australia, Buxus Balls of Berry and how he became by his terms, “the luckiest bloke in the world”.

Turfmate: Can you tell us about your work with Lawn Solutions Australia? How did it come about?

Jason Hodges: “I started with Lawn Solutions Australia when they were just Sir Walter. They sponsored my garden at the Melbourne Garden Show.

The first time was nearly 10 years ago, mine was the only garden in the exhibition that had a lawn in it, because it was the middle of the drought in Victoria and people had given up on lawns, and I ended up winning.

They’d look after me with turf and I just became really good friends with people in the organisation. I was lucky enough two years ago to head over to Texas with them where they were doing some studies on new Zoysia’s and other new grasses, and then they asked me if I wanted to be the ambassador.

I’ve been an ambassador for the last two years, which is like the best gig ever because you get to talk about something that you love.”

TM: What is your favourite part about being a Lawn Solutions Australia Ambassador?

JH: “I think a lot of people look at Australia and they see the beach or they see the country, but you never really talk about suburbia. I grew up in a suburban house with a dog and a hills hoist in the middle of the backyard, and played cricket and footy.

We didn’t have big alfresco dining areas or anything like that, we just had big lawns, and so I love talking about it because it’s part of my childhood.

People think ‘yeah, I’m going to save up for a fantastic holiday or a better car’, but maybe it’s something as simple as just having a bit of space between you and your neighbour, and also somewhere for your kids to run around so they’re not sitting down staring at screens all day.”

TM: What does Lawn Solutions Australia offer the home gardener?

JH: “If you made 20 phone calls to 20 different Lawn Solutions Australia members, I guarantee you the 20 people would give you the time of day even though it’s not a sale. They want to grow that market, and they want people to be passionate about it.

That’s why they went from just being Sir Walter; the grasses have the same names, like the Eureka Kikuyu and the Nullarbor Couch. Everyone knows what they’re talking about around the country, and they can advertise under the one name, but if you’re in Hobart, the grass will be a different variety, which is specifically the best one compared to if you were in Townsville for example.

They’re smart and they’re passionate, and if you have those two things you’re going to be successful, which they have been just by looking at the success of Sir Walter.”

TM: You are clearly a very passionate and fitting ambassador! Why do you think a good lawn is so important for Australians?

JH: “When I was a kid, you’d go out and come home when the lights come on, I know that’s cliché but that’s what you did. You’d go to the local park and play, and when it got dark you jumped on your pushy and you went home.

These days you can’t send six and seven year olds a few streets away to the nearest park, so I think the backyard is more important than ever.

A nice, looked after lawn improves your family’s lifestyle, it raises the value of your property, it’s healthy for the kids, and you’re cooling down your house and using the air con less. But unfortunately people think it’s a lot of hard work and they don’t have time.

It’s funny, you can go from one suburb to another, and the price difference in the properties can be half a million dollars, and it’s not the size of the house or the block, it could be the streetscape and the way the people look after their gardens and their lawns.

I can’t believe how many open for inspections or houses I see photos of and I think, they don’t need to paint that joint or jazz it up with a makeover, they need to mow the lawn every week for a month and it would look fantastic. I reckon it’s just something that we take for granted and we don’t even realise how good it is.”

TM: How did you get your ‘big break’ and make it into the world of television?

JH: “I’m the luckiest bloke in the world! I was working on a guy’s house back in 2000 and he was a TV producer.

Jamie Durie was the garden designer and I was the landscaper, the guy came back one day and said ‘you blokes should be on TV’ and so Jamie got a job on Backyard Blitz and I got a job on Auction Squad. From then on, it was just like the best job in the history of the world.

This week I’ve done some great stuff.
You think about doctors who are playing with people’s lives, or policemen who have to open doors and don’t know what’s behind it, or bank managers who have to play with people’s life savings and all the stress that goes into that.

Last week I made a fairy garden with my six-year-old daughter, which was pretty stressful, because hers is better than mine. And yesterday I made furniture out of logs where I burnt the inside of them out with fire and made some rustic furniture that was absolutely stunning.

I play, that’s what I do for a job. I get to play with things that I like to do. It has been life changing.”

TM: Working in TV must have given you access to some pretty cool jobs, what have been your favourite or most memorable?

JH: “Honestly, the stuff that’s nice is helping people that couldn’t do it, can’t afford to do it, or are busy doing things for other people.

Just recently we put in a granny flat for a lady who was only 35 herself, and is looking after a 15-year old girl who’s just had a baby. With the power of TV we can go and get the sponsors to get a granny flat, then landscape it, and you just think about how you’ve helped make a difference. And who knows, they might fall in love with gardening because now they’ve got a beautiful landscape to play in.

The other day I was just sitting in a coffee shop and a Dad came up to me and introduced his daughter, and told me she’d planted an avocado tree because of something I’d said on TV. Things like that; I’m a sucker for kids under 10 and ladies over about 80 – that’s my demographic. It’s just the dream job.

And you get to go to the Logies and see all the TV people, I remember the first time I went to the Logies, Dr Karl from Neighbours came up to me and asked me what time it was – I felt like I’d won a radio competition!”

TM: Is there something in particular you’re really enjoying using in your work lately?

JH: “Down at our family farm in Berry, we’ve started planting Buxus. They’re a little hedge plant, and you can clip them all the time and turn them into things like ostriches, or emus or whatever you want. We’re tapering them into balls; I call them the “Buxus Balls of Berry”.

It’s a really long term investment because you’re planting something the size of say a Coke can, and it takes about 10-15 years for it to get about a metre by a metre round, but they’re worth a lot of money when they get to that size.

So in 15 years time, “Buxus Balls of Berry” will be the Biggest and Baddest Buxus Ball Farm in the world!”

TM: The world of TV aside, what would you say has been a career highlight in terms of your landscape gardening work?

JH: “The first time I won the Melbourne Garden Show I burst into tears, because all I ever really wanted to do when I left school was be a landscaper and mow lawns.

I sort of surprised myself and was ridiculously shocked; it was my equivalent of winning the lotto.”

JH: “My brother is a horticulturalist, both my sisters are florists, my Dad is a bricklayer, and both my parents were mad keen gardeners.

When I was growing up I really liked the idea of being a builder or a bricklayer, but it’s so physically demanding.

Then I liked the idea of my brother being a horticulturalist, doing his apprenticeship in a nursery, and I liked the flowers that my sisters played with, so being the youngest of the four I just combined everyone’s jobs and became a landscaper.”

TM: What advice would you give to people that want to get into the landscaping industry?

JH: “If you want to be a landscaper, a greenkeeper or a horticulturalist, you’ve got to do it because it’s in you, you couldn’t do it if you just wanted money.

It’s a hard slog, but it’s very rewarding, I think it’s sort of like being the ‘Aussie Bloke’ version of an artist; because you do get to create something, but you can justify it by saying ‘yeah I worked hard, I’m a tradesman’ and you can bloke it up a bit.

There should be more people that are creative looking at landscaping, because there’s no creativity about bricklaying, carpentry, plumbing and electrician trades. You can be good and talented at it, but you’re really just following a set of plans every time. But if you’re a landscaper and you’ve got a bit of flair, you’re doing the plans, you’re doing the designs, you’re encouraging the client to do a bit extra and go a bit further.

You can make a point of difference, and that’s what I like about it.”