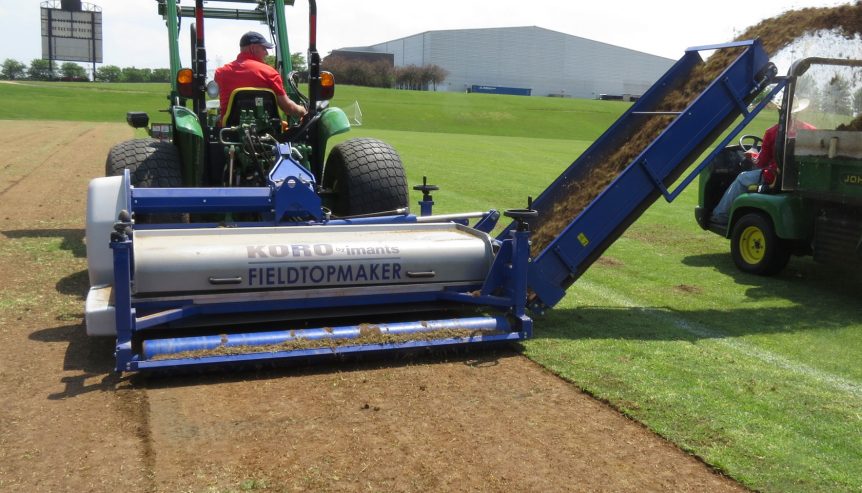 Fraze mowing removes above ground biomass to a depth of 2 inches (5 cm) while allowing turfgrass to re-establish via belowground rhizomes.

Field research was conducted from 2015 to 2017 at the University of Tennessee-Knoxville on a zoysiagrass (Zoysia japonica ‘Meyer’) fairway naturally infested with P. annua. Turf was fraze-mowed (1-inch [2.5-cm] depth) in June of each year, with debris collected and discarded. Control plots (7.9 × 7.9 feet [2.4 × 2.4 meters]) that were not fraze-mowed were included in each replication for comparison.

Each spring, P. annua infestations were quantified via plant counts. Soil cores that were removed from the center of each plot in spring underwent soil seedbank analysis at Purdue University (West Lafayette, Ind.). Germination assays in this analysis quantified the total number of weed seeds in each core, along with the species, type and life cycle of weeds present.

In field studies, fraze mowing in June significantly reduced P. annua plant counts (26%) the following spring. Our findings suggest that summer fraze mowing can reduce P. annua populations in zoysia turf, but this technique may not provide acceptable control when used alone and should be incorporated into a diversified weed management program.

Fraze mowing is gaining popularity around the world and it can be a very effective cultural practice on your natural grass fields when done correctly. Simply put, fraze mowing involves the mechanical removal of the top layer of thatch and organic matter accumulation by use of a rotary spindle using specialized tines or blades. Depending on how deep you go, you can also remove some of the surface soil. We have been using these types of machines for years to remove a deeper top layer (.5-2”) of grass and soil for re-sod operations, but the newer tines and axles allow a less invasive top layer removal that leaves some plant material behind on the surface.

With fraze mowing, we are looking at a shallow depth that will leave roots, stolons, rhizomes and some crowns intact for turfgrass re-growth. The debris that is removed typically is run up a conveyor belt into a collection unit for disposal, composting or other uses. You’ll want to plan ahead for what you will do with your spoils.

In ryegrass overseeded Bermudagrass fields, fraze mowing can be of great aid in removing and stressing the ryegrass and stimulating Bermudagrass growth in spring/summer transitions. Removing some of the verdure will expose more of the soil surface to the suns warming rays which may stimulate the Bermudagrass. Cutting some of the above-ground stolons will also stimulate the Bermudagrass. The same concept will also work well in Kentucky bluegrass fields that may have been overseeded for some time with perennial ryegrass to the extent that the PR population is more than the turf manager desires.

Surface black layer, crusting and algae can pretty much be removed by fraze mowing. Again, get to work on the conditions that may have led to these maladies in the first place or they may return in time.

Fraze mowing may be a much less expensive alternative to complete re-surfacing by sod or other more invasive full surface renovation treatments, but it can’t cure all. It is a fairly invasive treatment that will require some time without play for healing and reestablishing the turf stand. The no-play period will vary between a couple of weeks in lighter, less invasive fraze mowing’s and up to a month or even two in some more aggressive cases that rely more on seeding for reestablishment rather than regrowth as the predominate reestablishment mechanism.