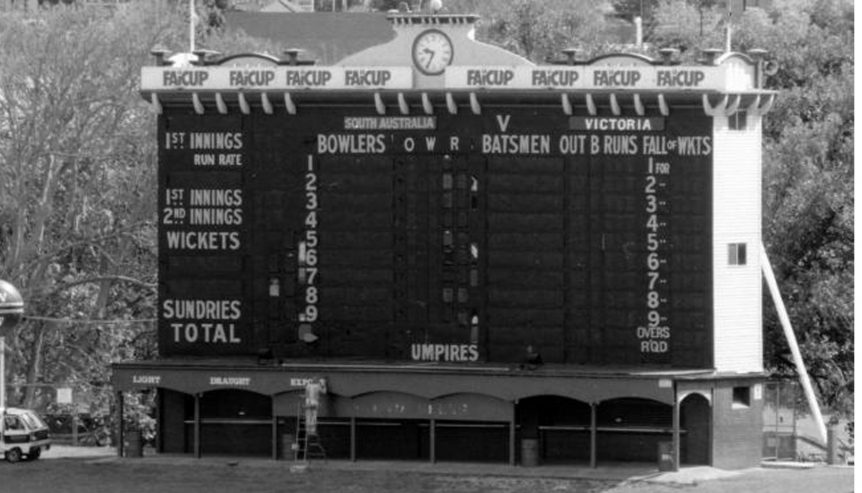 It has been the scene of some of the most dramatic moments in cricket history, including the Bodyline Test of 1933, but over 146 years Adelaide Oval has a remarkable history all of its own.

From the early days the Oval, wedged between the River Torrens to the south and the parklands and St Peter’s Cathedral to the north, was regarded as one of the world’s most beautiful sporting venues.

Even through radical recent renovations, it has retained the integrity of its old-world charm while significantly improving facilities and the overall experience of playing and watching cricket.

The first century scored at the ground was recorded by John Hill, father of legendary Australian Test player Clem Hill, in January 1878.

The Adelaide Oval scoreboard in 1990.

It took more than a decade for any significant structure to be erected; the George Giffen Stand named after the South Australian all-rounder who scored more than 1000 runs and claimed 103 wickets in 31 Tests for Australia, was built on the Oval’s western side in 1882.

Two years later, in December 1884, the Oval became only the sixth venue in the world to host a Test match, when England defeated Australia by eight wickets. Since then the ground has hosted Test match cricket every summer.

The bank of spectacular Moreton Bay fig trees at the northern end was planted for welcome shade in the 1890s and the grassy mounds at each end, ‘The Hills’, were created in 1898 from earth dug out and carried from the banks of the Torrens River.

In 2003, two grandstands, named after SA’s cricketing Chappell brothers Ian, Greg and Trevor were completed. In 2009, the State Government announced it would fund redevelopment of the Oval into a multipurpose sports facility to accommodate AFL football and pay off SACA’s $90m debt.

By late 2010, the Western Grandstand, with seating for 14,000, was completed, and following a vote by SACA members in favour of a full redevelopment, the government increased its funding commitment to $535 million.

The Chappell and Sir Donald Bradman stands were demolished by 2012 and by March 2014, in time for the state election, the eastern stand was completed with a capacity of 19,000, bringing the overall seating capacity of the stadium to 53,500.

The Oval’s dimensions changed to 183m x 134m to better suit AFL, meaning the distinctive nature of the ground for cricket was changed. But Adelaide Oval continues to make history.

It hosted the world’s first day-night Test match, when Australia played New Zealand from November 27, 2015, and on Saturday another chapter will be written with a capacity crowd packing the ground for the first ever day-night Ashes Test.

1871. Oval established with the formation of the South Australian Cricket Association.

2003. The Chappell Stands built on the eastern side.

2015. The first ever day-night Test match is played, between Australia and New Zealand.