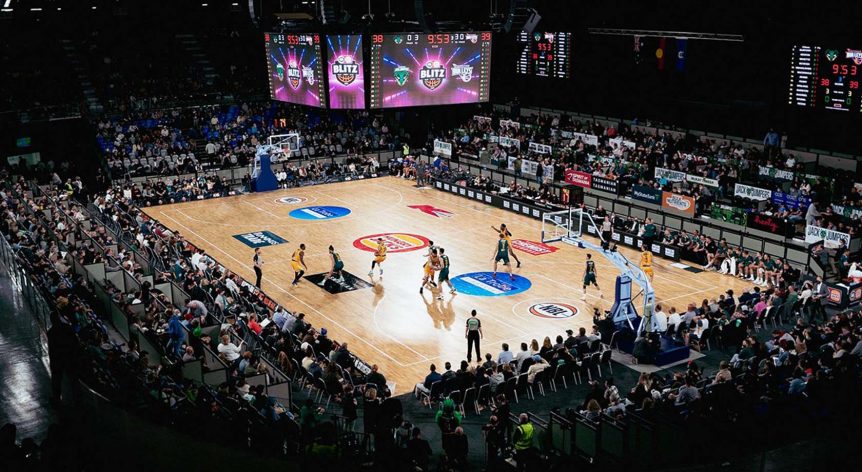 Following its $66 million refurbishment, the rebranded MyState Bank Arena opened its doors for the first time on Sunday as the Tasmania JackJumpers played their opening game of the NBL pre-season competition.

Formerly known as the Derwent Entertainment Centre, the 32-year-old venue has been transformed into a world-class indoor arena following the completion of its major redevelopment, and there’s more to come with future development within the precinct.

The fast-tracked redevelopment was completed in less than a year, despite Covid, and while the final price tag was $15 million more than the initial budget, the end result is impressive.

At the heart of the upgraded venue is a jumbotron, featuring four large LED video screens, hanging from the roof above the court. Costing $1.5m, the structure weighs two tonnes and provides every spectator with close-up views of replays and scores. There are also two additional video screens on the wall of the stage side of the building.

The capacity remains unchanged, with basketball mode allowing for 4500 spectators to pack in for NBL matches at the venue, while as many as 8800 can be accommodated for concerts, with the retractable lower tier of seating able to be removed.

The concourse has had a striking Tas Oak refit, the food and beverage areas, members lounges and bars are unrecognisable to what was previously on offer and the court now offers corporate facilities.

NBL and JackJumpers owner Larry Kestelman said, “It looks amazing. It is something everyone can be very proud of, it looks wonderful and there are a couple of more things we are going to be doing over the next few months in terms of food and beverage but everything that is meant to be finished on time is finished.”

Tasmania is hosting the bulk of matches during the NBL Blitz pre-season competition, with MyState Bank Arena hosting the first of five matches across three separate days on Sunday. While the JackJumpers didn’t get the win in their first game in front of their fans – going down 79-89 to the Brisbane Bullets – they’ll get another opportunity on Tuesday night.

The opening event was officially a sell-out with all 4500 free tickets allocated and arena was as good as full for its grand re-opening during the double-header on Sunday. Prior to the game, Tasmanian Premier Peter Gutwein cut the ribbon to officially open the venue.

The next stage of the development at the site will be a $35 million indoor multi-sport facility, providing training facilities for the JackJumpers and community sport, with construction set to begin in 2022.

Future plans include a $200 million shopping, restaurant and hotel precinct adjacent to the arena at Wilkinsons Point.

The Tasmania JackJumpers will open the NBL season with their first home game on December 3, against the Bullets. It’s anticipated the revamped MyState Bank Arena will host between 100 and 150 events per year.