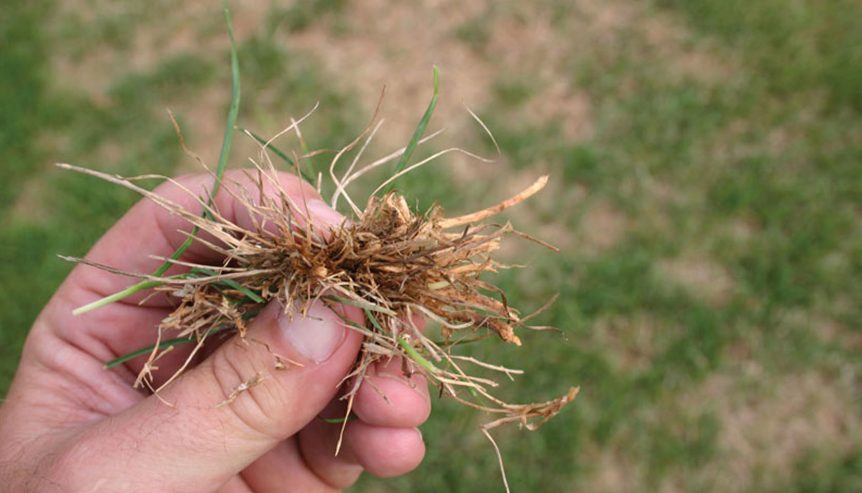 One of the most critical steps in creating an integrated pest management (IPM) plan is to monitor pest activity throughout the growing season. This article describes several techniques that can be used to monitor insect activity. Unlike monitoring pathogen activity, scouting for insects is often fairly straightforward, because the insects are usually big enough to see using a variety of techniques.

Scouting for turf insects: Use the clues around you

When you see turf damage, you should think of yourself as a crime scene investigator and look for clues that might help narrow your search for the cause. The first piece of evidence involves looking at the damage (Figure 1). Does it appear to be caused by insects or pathogens or something abiotic? This article will focus on insect damage, but symptoms can be confusing. For example, annual bluegrass weevil damage can look very much like anthracnose damage in June if you look only at the superficial damage and fail to notice larvae feeding in the thatch.

What does damage look like?
Many aspects of turf damage can provide clues as to which insect species might be involved. Are there several discrete patches, each of a similar size and appearance, or is the damage more variable (Figures 2 and 3, below)? Is the turf intact, or is there evidence of feeding? If there is feeding, does it occur on the roots or stems or blades? Can the affected turf be pulled up easily? What color are the patches? 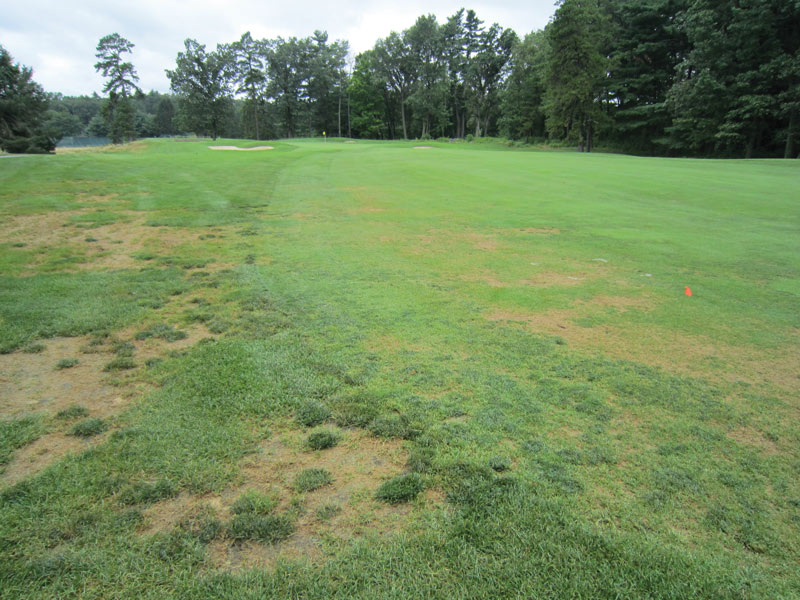 Figure 2. Although the scars on the fairway may bear little resemblance to the nearly barren sections of the rough, annual bluegrass weevil was the guilty party in both cases. Photo by Ben McGraw 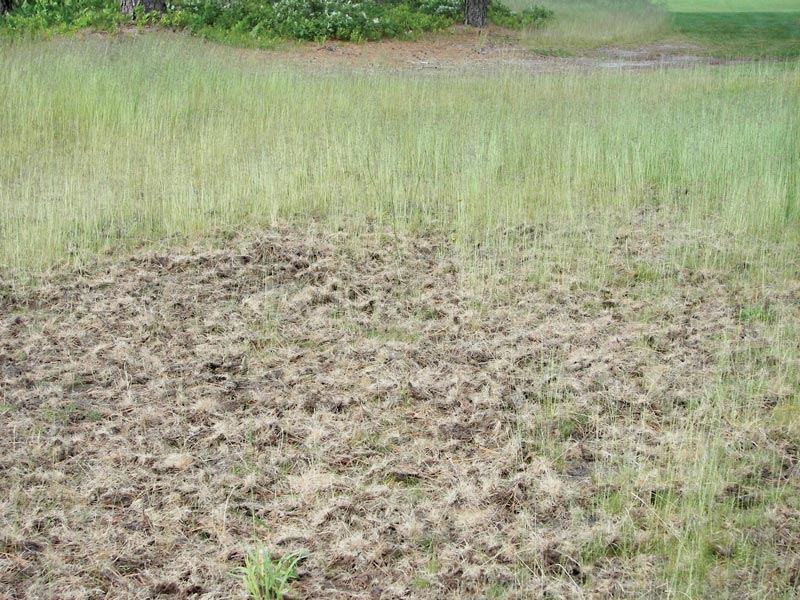 Figure 3. This turf suffered extreme damage caused by the presence of insects, but not by the insects themselves. Skunks severely injured the turf as they foraged for a feast of grubs. Photo by Pat Vittum

Where does damage occur?
Does the damage occur on all the grasses, or does it occur only on certain species or cultivars? Which playing surfaces are affected? Damage caused by the same insect often looks very different on greens and surrounds than it does on tees, fairways or roughs. Are there certain conditions or locations that seem to coincide with damage? Examples include edges of fairways, south-facing slopes, sandy soils, heavy soils, soils with poor drainage and areas near sprinkler heads.

When does damage occur?
Most turf damage that is caused by insects occurs about the same time each growing season. Growing degree day accumulation and plant phenology (timing of certain plant developmental stages, such as full bloom) can often be helpful in predicting which insects might be present at a given time. Indeed, many universities base their management recommendations for turf and ornamental plants on growing degree day accumulations instead of calendar dates. Make notes when you notice damage, and record any trees or shrubs that are just reaching full bloom or any other notable stage of development. As you add notes each year, your field observations will help you recognize what might be happening with seasonal pest activity.

What environmental conditions are present at the time of damage?
Many insects will thrive in certain conditions and do less well in others. For example, soil moisture is important. Some insects, such as invasive crane flies, survive better when soils are almost saturated at the time of egg-laying or larval emergence. Japanese beetles and some other scarabs like soil that is moderately moist, while European chafer grubs prefer drier conditions. Some insects feed only on one or two species of grass. For example, the annual bluegrass weevil prefers annual bluegrass in the northern part of its range, but it will also feed on creeping bentgrass in the southern parts of its range. Many insects develop better in areas with thick or dense thatch.

Make notes on the agronomic conditions in the areas where you observe insect damage, including soil texture, soil moisture, soil temperature, thatch thickness or density, effectiveness of drainage, and uniformity of irrigation coverage. And, of course, note the species or cultivars that are affected, as well as the mowing heights that are most vulnerable to the damage. 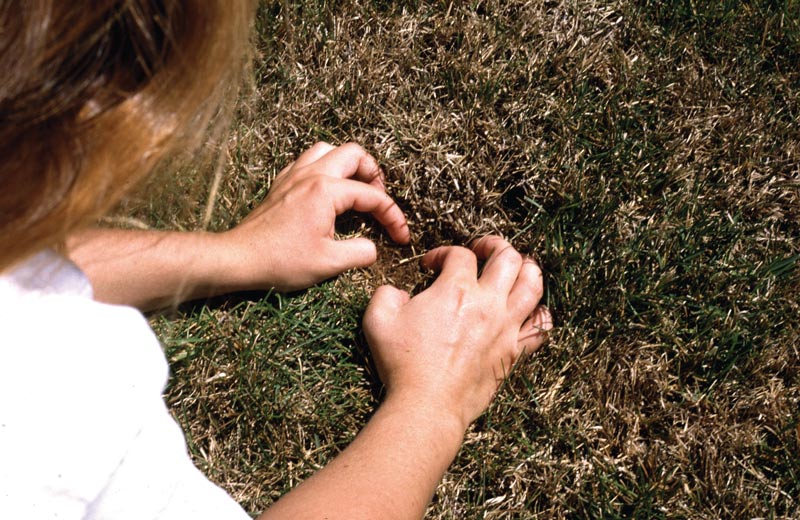 Figure 4. Often, the search for insects is as basic as getting down on your hands and knees and teasing apart the grass, as illustrated by this researcher’s hunt for chinch bugs. Photo by Dave Shetlar

Many simple techniques can be used to scout for turf insect activity throughout the golf course (Table 1). Some techniques involve actively looking for insects — and getting a sense of how many insects occur in a given area (often a square foot) (Figure 4). The effectiveness of each technique depends on having a good idea of where the insects are most likely to be. It is important to understand the life cycles of the most common turf insects that are likely to occur in your area, so you know what time of year to be looking for them. And it is important to know which kinds of conditions those insects prefer, so you can concentrate your scouting efforts in the most likely areas. You are not likely to find very many black cutworms on a Kentucky bluegrass rough, for example, as black cutworms do not grow well on Kentucky bluegrass, but you may notice activity on the neighboring creeping bentgrass green.

The techniques described below can be used to scout for insect activity on golf course turf. Additional techniques have been developed for monitoring insects in trees and shrubs. 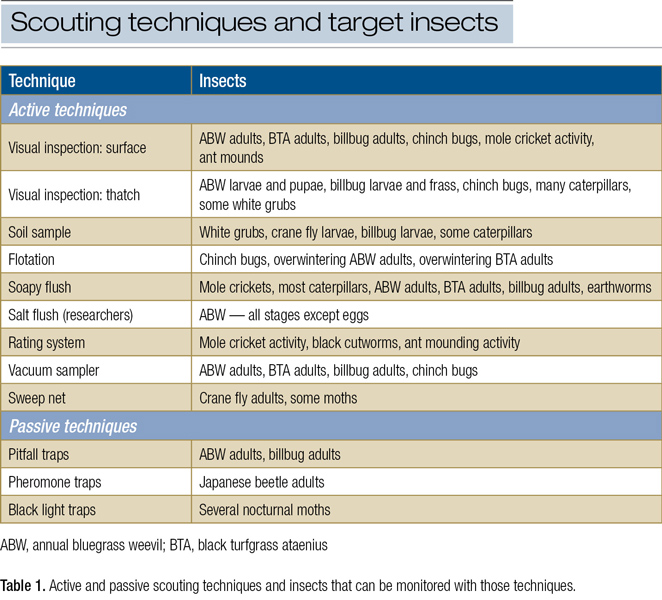 Visual inspection
The simplest way to scout for turf insects is to get down on your hands and knees and look for them! You might kneel and tease apart the upper layers of the thatch, looking for insects or movement or telltale deposits. For example, annual bluegrass weevils can be seen moving on the surface even though they are quite small (Figure 5, below). Billbug larvae produce frass (insect fecal deposits) in the thatch that looks very much like sawdust (Figure 6, below). Visual inspection can also be conducted on a sample of turf that has been cut out using a knife or cup-cutter. Tease the thatch apart and look for insects that are active in the thatch, including annual bluegrass weevil larvae, billbug larvae and several species of caterpillars. 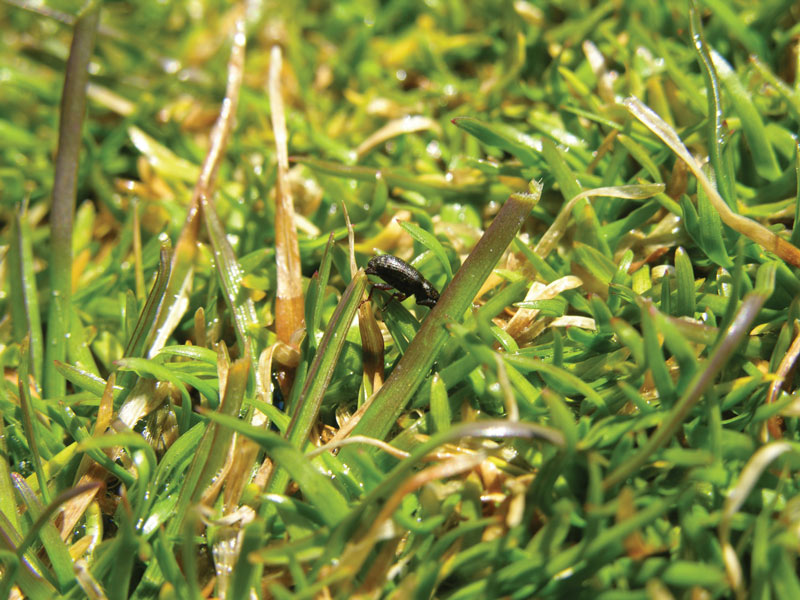 Figure 5. Even small insects like annual bluegrass weevils (shown here) and chinch bugs can be spotted and identified as they move on the turf’s surface. Photo by Charlie Kerr 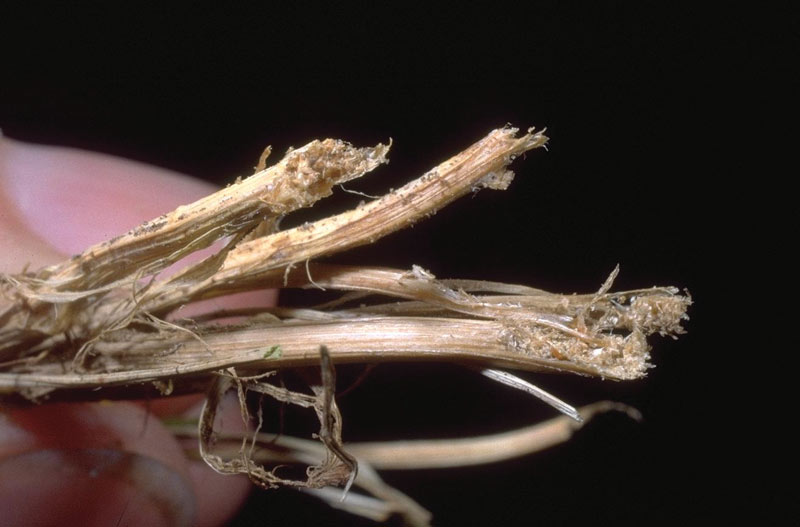 Figure 6. Recognizing an insect’s distinctive fecal matter (or “frass”) is another way to determine which pest is responsible for turfgrass injury. The billbug frass in this photo bears a strong resemblance to sawdust. Photo by Dave Shetlar