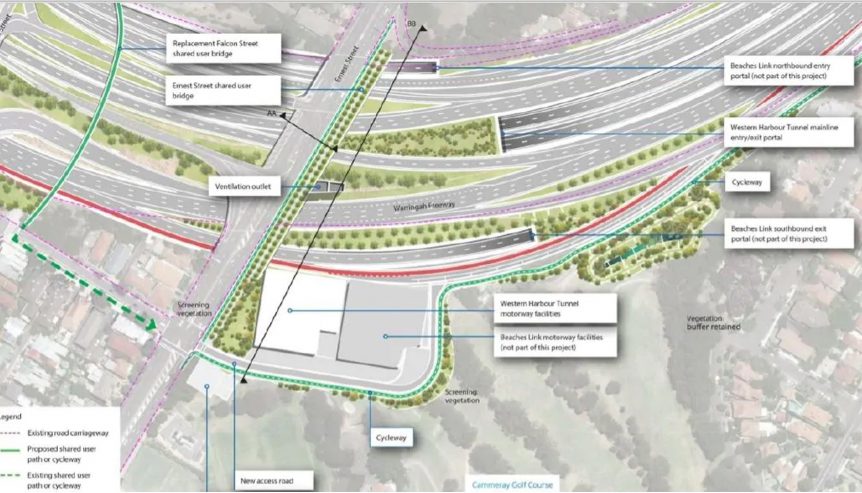 More than a dozen homes, businesses and sections of a popular golf course will be acquired under new plans for Sydney’s next major tunnel project.

The Environment Impact Statement for the Western Harbour Tunnel has revealed 28 properties will be fully or partially acquired for construction of the estimated $15 billion project, due to begin this year.

Twenty properties will be fully acquired and demolished including a 12 unit block of flats at 1-3 Morden St in Cammeray along with adjacent homes at 36 and 53 Bellevue St.

A 25,000 sqm section of Cammeray Golf Course would also be become a “construction support site” housing site offices, an acoustic shed and facilities buildings for up to five years.

Works at the government-owned site would involve redesigning the golf course, including potential reductions in the length of fairways, modifications to golfing pars and the removal of trees along the Warringah Fwy.

Documents stated “noise, dust and construction traffic” generated from the project may impact the “amenity of the course” and could “deter some people from using the course during construction phases.”

Plans released on Wednesday have also confirmed a construction support site will be built in a southeastern section of St Leonards Park, next to North Sydney Bowling Club.

Documents stated works at the site could “detract from the use and enjoyment” of the park and result in potential noise and dust impacts on the bowling club, users of North Sydney Oval and the nearby KU Grandstand Preschool.

Other sites confirmed for construction activities include waterfront land at Berrys Bay in Waverton and 10 per cent of Anzac Park in North Sydney.