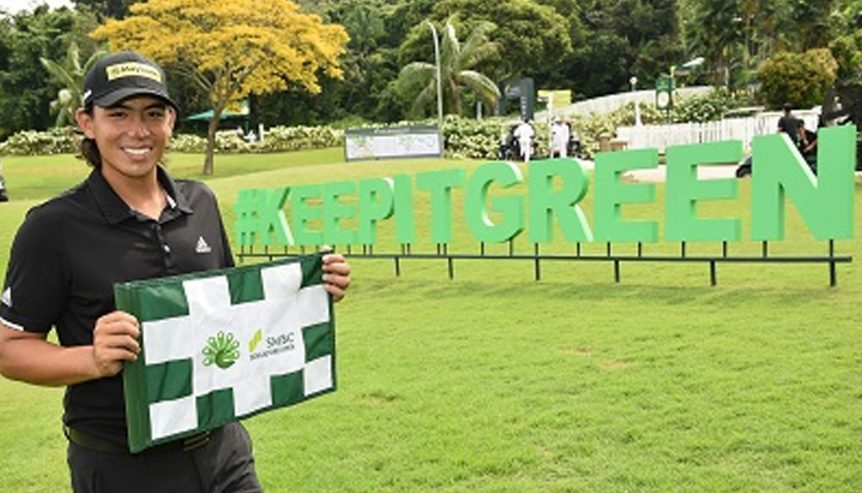 One of the world’s leading golfing establishments, Sentosa Golf Club has celebrated the start of what promises to be a memorable year by launching a unique campaign designed to increase awareness of the game among youngsters in the local community, as well as drawing attention to sustainable practices within golf.

#KeepItGreen was unveiled by rising golf star Gavin Green on the eve of the 2018 SMBC Singapore Open, being staged for the 11th time at Sentosa Golf Club, a Golf Course Facility Member of the Asian Golf Industry Federation. Once again, the event is taking place over its revered Serapong Course, voted the Asian Tour’s ‘Best Golf Course’.

The big-hitting Malaysian will support the #KeepItGreen campaign throughout the tournament, with Sentosa Golf Club in association with the Singapore Golf Association, by offering free rounds of golf to local juniors for every green in regulation that Green hits during the four rounds.

Green, 2017 Asian Tour Order of Merit Champion, reflected on his time as a junior golfer in Asia and the importance of raising the profile of the game in the region. He said: “I’ve been fortunate enough to be able to look up to people like Jeev (Milkha Singh) when I was very young, and more recently Kiradech (Aphibarnrat). Having role models like these as a young golfer in Asia was really valuable, and I hope I can now do the same for many more, because golf gives so much, and I’m really living my dream out here.”

Supported by the game’s most influential stakeholders, including The R&A, the SMBC Singapore Open field, as well as the club’s membership and tournament spectators, #KeepItGreen seeks to amplify crucial messages which are of increasing importance to the sport. As one of the most sustainable tourism destinations in the world, Sentosa Island, upon which the golf club and its two courses are set, is uniquely placed to contribute on two very topical subjects within the game.

Dominic Wall, The R&A Director Asia-Pacific, said: “In light of our partnership with Sentosa Golf Club, and it being the location of our Asian Headquarters, it’s great to see the team here really drawing attention to two matters that we take very seriously as an organisation. Growing the game in Asia is a must to secure the sport’s longevity, and shining a light on the need for sustainability in our game is also a very contemporary issue that isn’t addressed enough.”

On the initiative and the campaign, Andy Johnston, Sentosa General Manager and Director of Agronomy, said: “#KeepItGreen targets very relevant issues that relate not just to the game but those which are having a massive bearing for the future. Creating a legacy with events like the SMBC Singapore Open is such an important part of making a difference and encouraging change, and we’re confident that our message will resonate amongst the local community, and the wider international audience.”

The SMBC Singapore Open is the first of four prestigious tournaments to take place at Sentosa in 2018. The venue will also stage the Women’s Amateur Asia-Pacific Championship, the HSBC Women’s World Championship and the Men’s Asia Pacific Amateur Championship, each of which will deliver television audiences into the tens of millions and attract some of the biggest names in male and female amateur and professional golf.