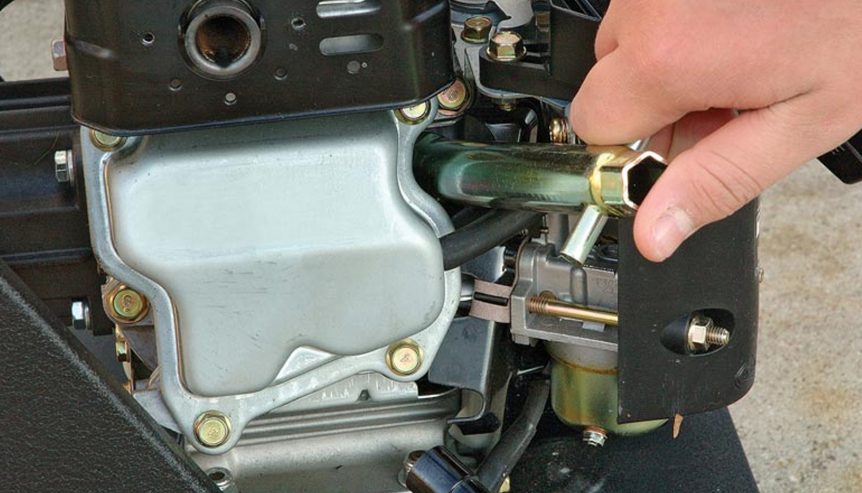 Power equipment such as snowblowers, power washers, generators and lawn mowers are built to do a specific job, and in most cases, they do it well. But when a piece of equipment doesn’t perform as it should — or not at all — it not only impacts how safely, efficiently and quickly you can do your job, but it can also impact your bottom line.

That’s why proper engine maintenance and on- and off-season preparation are crucial. Without this attention, the engine’s performance could be diminished and its life span drastically reduced, which means you’ll be spending more time and money on repairs and replacements. And when your equipment is out of commission, it also means projects on the golf course start running behind schedule.

But make regular engine maintenance a habit, and the reverse is true: Machines run at peak performance, engines last longer, and the potential for injuries and costly damage to components is reduced.

Get fired up
Before you fire up an engine at the start of a season, make sure it’s ready.

Inspect the engine on a stable, flat surface in a well-ventilated area away from ignition sources. Check all components to make sure they are clean, in good condition and firmly in place, including the spark plugs, muffler and fuel cap. Be sure wires and fuel hoses are intact and in good condition. Damaged fuel hoses can allow fuel to escape, which increases the risk of fire when they’re near a hot engine.

Tighten or replace bolts that may have become loose or damaged via vibrations or fluctuations in temperature. Operating equipment with loose or broken fasteners could result in serious damage to the engine and operator.

Clean air is crucial to the engine’s efficiency. To make sure it’s getting enough, check the air filter and replace it if it’s dirty. Also replace a foam filter that has torn or shrunk so that contaminants don’t get into the engine.

Even more vital to engine efficiency is fuel. If it hasn’t been treated with a stabilizer, it degrades and becomes stale. Stale fuel causes residue buildup that can plug the carburetor and prevent the engine from starting. To avoid this entirely, always replace old fuel.

Oil that hasn’t been changed regularly can become thick and gummy and increase the risk of corrosion, which can keep the engine from running efficiently. Replace it with oil that has the proper weight as specified in the owners manual.

Verify that all wires are intact and in good condition.

If the engine has accumulated dirt and dust while in storage, a thorough cleaning will get rid of buildup and keep it running efficiently. Make sure the engine — and the recoil starter, if the engine is equipped with one — is free of dirt, grass and other debris. Also ensure the cooling fins under the shroud are clean and free of obstructions that could cause the head area to overheat. You can use an air hose to blow off the engine, or you can wipe it down with a dry rag. Avoid washing it with a hose or pressure washer, which could force water into the engine and cause corrosion.

Now you’re ready to roll, push or pull into the season.

Engine troubleshooting: What to do when

It’s not uncommon to occasionally experience problems with starting or lost power. When this happens, always begin by inspecting the four things an engine needs to operate: fuel, oil, spark and compression.

Always make sure there is enough fuel in the tank and that the fuel valve — if the engine is equipped with one — is open and in the “on” position. Also ensure the engine has enough oil and that the ignition is turned on. While these are obvious concerns, checking them first can save you a lot of time and hassle.

In addition, check that enough fuel is making its way to the engine. Choke and pull the starter five or six times, then remove the spark plug and see if the electrode is wet. A dry electrode indicates that not enough fuel is being supplied to the engine, which can be a result of several issues and should be inspected by a repair shop.

An improperly gapped or loose spark plug could also be the culprit behind an engine that doesn’t start. Inspect it to make sure the porcelain and electrodes are not damaged and that it’s properly gapped so it can fire efficiently. Refer to the manufacturers manual for the recommended gap distance. Tighten the spark plug firmly, but don’t make it too snug, as this can damage the threads in the cylinder head.

Making sure the spark plug is properly gapped and producing a spark is one way to troubleshoot an engine that won’t start.

You should also check to ensure the spark plug is producing a spark. To test it, take the cap off and remove the spark plug from the engine. Insert it back into the cap and place the metal base against the engine, which will ground the current as you test. Confirm the ignition is in the “on” position and slowly turn the engine over. If the plug does not produce a spark, then it should be replaced.

Test the engine’s compression by slowly turning it over but not starting it. If you can do this with little to no resistance, it’s an indication of a compression problem, and the engine should be taken to a repair shop.

If your engine still doesn’t start, it’s time to visit the repair shop.

On the other hand, if your engine starts but operates with less power than normal, there’s still more you can do yourself. Make sure the air filter is clean and unobstructed. If the fuel has a distinct odor (similar to varnish), it’s likely stale and could have caused residue buildup that plugged the carburetor. If so, you’ll need to replace the fuel and clean the carburetor. Typically, you can use carburetor cleaner from most automotive stores.

Anytime issues arise, it’s a good idea to go to the manufacturer’s website — many of them offer how-to videos on troubleshooting common issues — but what’s even more critical than troubleshooting is heading off those unexpected problems with regular maintenance.