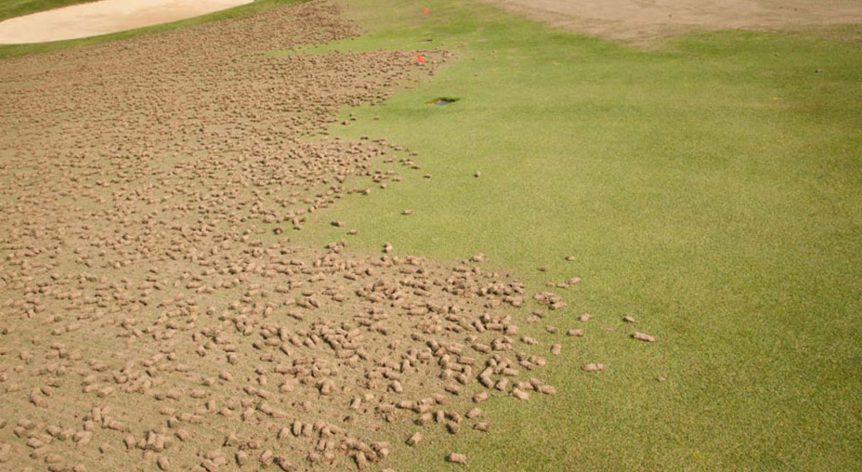 Traffic may well be the most important stress affecting golf courses. The projected increase in foot and vehicle traffic from increased play will result in damage from soil compaction, wear and soil displacement. The dominant traffic stress will depend on intensity of traffic, soil, texture, soil water content and plant density.

Wear, which is the physical abrasion of leaf tissue, occurs on heavy-traffic sites, especially on dry sandy soils.

Soil displacement or rutting occurs on saturated soil when loads are heavy. Because all pore spaces are full of water, the weight displaces the soil rather than oxygen.

Soil compaction is the pressing together of soil particles into a denser mass, resulting in a reduction of air-filled pore space. Heavy soils with soil water contents near field capacity are more prone to soil compaction when subjected to heavy loads or frequent traffic.

Soil compaction is not limited to heavy soils. It may occur on high-sand-content greens, especially if the greens are poorly constructed.

The effects of soil compaction on root growth and activity have been documented by altered root distribution and increased root porosities.

Data from research conducted by Agnew and Carrow in 1984 indicated that soil compaction resulted in increased root growth near the surface while deep rooting decreased. Shallow roots result in decreased water and nutrient absorption. Thus, the golf course superintendent needs to irrigate lightly and frequently. This results in poor use of valuable irrigation water.

The effects of soil compaction on shoot growth have been documented by reduced visual quality and shoot density, decreased rhizome development, and reduced clipping production. These responses are understandable, because water and nutrient uptake are adversely affected by altered root distribution.

Plant water status can be adversely affected by soil compaction. In research conducted by Agnew and Carrow, evapotranspiration declined in Kentucky bluegrass growing under compacted soil conditions; however, water use increased in the same sites.

The decline in evapotranspiration was due to closure of stomates, which in turn resulted from less available soil moisture. Plants with an extensive root system had better evapotranspiration rates, and the stomates remained opened during critical time periods for cooling the plant. These plants had canopy temperatures 10 F less than plants growing in compacted soils.

In addition, plants growing in compacted soils are more subject to temperature extremes that will cause the deterioration of physiological and morphological parts of the turfgrass plant.

Another physiological response that is affected by soil compaction is total nonstructural carbohydrates (TNC), which refers to the soluble sugars and carbohydrates in the plant. It is an important constituent within the plant that has been linked to recuperation and hardiness.

In research conducted by Carrow in 1979, compaction reduced TNC in three plant species. This indicates that plants growing under compacted conditions are less likely to survive adverse environmental conditions. The superintendent that doesn’t aerify his or her golf course greens in fall may experience greater winter desiccation.

The adverse effects of soil compaction on plant growth are severe and long-lasting. It is important to alleviate soil compaction as soon as it has been identified. This is best done with cultivation.

Core cultivation, which involves the removal of cores with either hollow tines or spoons, is still the best means of alleviating soil compaction. The closer the tines are spaced, the more effective the cultivation treatment. Furthermore, it is important to penetrate the compacted zone within the soil. If this is not done, a barrier will still remain that will prevent growth and development of the turfgrass.

Cultivation methods that slice into the ground provide only temporary relief to compaction stress. These methods include grooving, slicing and spiking, They can provide increased water infiltration, but they do not alleviate the low soil oxygen levels that exist in compacted soils.

New methods of cultivation, such as deep-tine aerification, may provide compaction relief of deeper compacted zones within the soil. These compaction layers may be built up over the years because of topdressing practices.

In summary, soil compaction decreases plant growth, which in turn inhibits plant metabolism. The decreased plant metabolism can predispose the turfgrass plant to injury by drought and high temperature stresses.