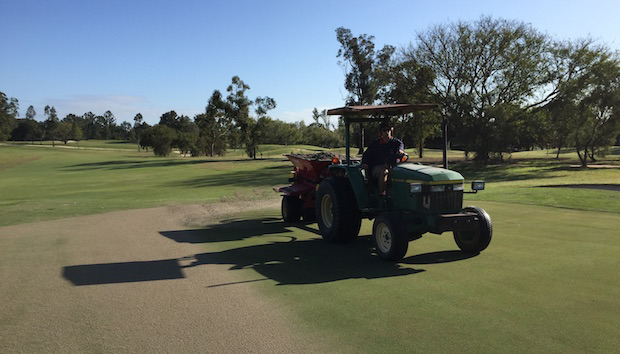 It has been an especially chilly winter on the east coast of Australia this year, with many areas breaking one record or another for low temperatures. Even Brisbane had its inhabitants rolling around in their snuggies and uggies for longer than the usual one week of Queensland winter weather.

However with September come and almost gone it is time once again for Spring renovations on golf courses all over Australia; an activity that have both greenkeepers and golfers grumbling about, but for very different reasons.

The Brisbane Golf Club shut down for Monday and Tuesday this week to give their committed and hardworking maintenance team some uninterrupted time with the playing surfaces on the course. Talking to Superintendent Mitch Hayes about the process of renovating over 20 greens and a hand full of tees in only two days one can’t help but feel for the workload which lies ahead for himself and his team.

The unsocial starting time of 5am is not relaxed for days like these where the usual time pressures tend not to apply due to the forced absence of the members. What is adjusted however is their finish time, which simply isn’t set – they finish when the work is done.

“We’ll be giving the greens a light verti-cut and a twelve-mil hollow tine on every green and the driving range tees, then there’ll be a generous top-dress and fertilizer program to administer,” said Hayes, when asked exactly what the start of this working week would entail.

For those not as acquainted with the world of turf management as Mitch Hayes, now well into his 13th year in the industry, it is understandable these terms may take one by surprise – after all it’s just grass right? What else is needed besides a bit of regular rain? The answer is, a lot!

The game of golf has progressed far beyond its modest roots when balls were smacked around paddocks in the countryside.

The science behind greenkeeping and golf course management is now a multi-billion dollar industry with new species of grass being birthed in labs in an attempt to create stronger and more durable playing surfaces for a wide range of environments.

The upkeep of these genetically enhanced species is a process in itself.

At the Brisbane Golf Club all but a few playing surfaces have been switched to a strain of Bermuda grass commonly referred to as ‘Champion’ which is known for surviving the dormant period of Winter far better than the ‘328’ Couch strain; found on most other courses in Australia. The experiment seems to have been a huge success so far which makes the biannual renovations all the more important.

The mention of a “verti-cut” refers to vertical mowing and is a process of running teethed cylindrical blades through the greens as a way of clearing it of a dead bio-mass called ‘thatch’.

Though a certain amount of thatch adds to the body of the green and contributes to its spongy composition, too much can create a suitable environment for the spreading of turf diseases and can cause fertilisers and necessary chemicals to become tied up and lose their efficacy. Regularly cleansing the greens of this material helps them to refresh and stay healthy.

The hollow-tine is a puncturing process which extracts small cores filled with old soil from the green to allow both aeration and fresh sand to be top-dressed into the vacant space. This also allows space for the roots of the Champion grass to grow back in and give new chutes a chance to break through to the surface.

Though Mitch’s team will be using very sophisticated and specialised machinery to conduct these activities, there is still a huge component of manual labour involved in the clearing and collecting of cores and ripped up thatch. This will see some of his crew members become very well acquainted with a shovel.

The major goal of all of this is the prevention of disease, which can sometimes cause the death of greens on golf courses, and to allow the champion grass as strong an environment as possible in which to flourish and strengthen.

The downside to the process is fairly blatant but very temporary – the greens retain a rougher surface for a couple of weeks following the renovations process. This is never more obvious than to a full field of eager members who are chomping at the bit for a round of golf the day after the renovations have been completed.

With few ever grasping the necessity for such a rigorous procedure it can cause confusion as to why the greenkeepers have apparently committed greens homicide when they spend most of the rest of the year meticulously pining over the finest details.

A thorough explanation of the benefits of a comprehensive renovations period goes a long way to putting the collective minds of the golfing public at ease. Much like a bi-annual teeth scrape at the dentists, unpleasant though it may be, a well performed renovation of any green adds to the longevity and top end quality of the surface itself.