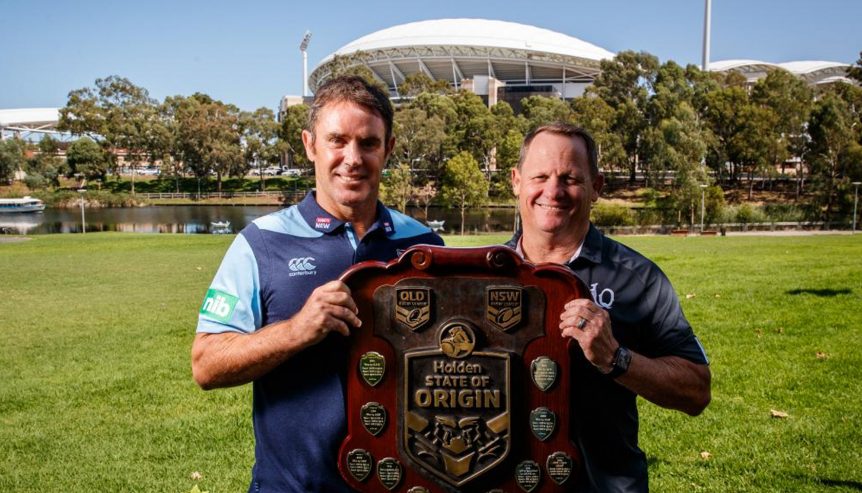 Brad Fittler’s earliest State of Origin memory is standing on the SCG hill as a 12-year-old to witness Greg Dowling’s miracle-try as Queensland downed New South Wales in heavy rain.

More than three decades on, the Blues coach predicts a sea of support on Adelaide Oval’s famous grass mound, as rugby league’s showpiece occasion comes to SA for the first time.

“My first memory was going in 1984 to watch Wally Lewis hit a crossbar with a field-goal attempt and Greg Dowling catching it (before scoring),” Fittler recalled.

“I was on the hill with my uncle (and) it was one of my greatest memories.

“One thing I do love … is the fact that it (Adelaide Oval) has got a hill.

“To see one of the great stadiums in our country actually has a hill … I think is fantastic.

“We’re going to have loads of blue wigs on your hill.

“I’m really looking forward to that.”

Fittler and his Queensland counterpart Kevin Walters were in Adelaide on Tuesday to launch this year’s three-game Origin series, which begins at the Oval on Wednesday, June 3.

A 53,000-full house is expected for the clash, as SA becomes the third Australian state outside of the combatants to stage a meeting of the bitter rivals.

Fittler, who has led the Blues to victory in the past two series, said the rich history of the North Adelaide ground was not lost on his players.

He backed Origin matches being staged outside the sport’s traditional powerbase, after overseeing NSW wins in Melbourne in 2018 and Perth last year in front of near-capacity crowds.

“It really shows that there’s such a massive (home team) advantage in this contest and there has been forever.

“Taking one of the games away equals it up and also allows us to share State of Origin.

“For so long, we kept it to ourself.

“We’re just starting to realise actually more people would like to get involved and it was shown very well last year in Perth.

“This will be no different and playing on a place with such a rich history is just exciting for the players.

“This will be something the players remember forever.”

Adelaide’s Origin contest will be the latest instalment in a battle dating back to a one-off match between the states in 1980.

It has since grown into the highlight of the rugby league calendar, regularly attracting national television audiences in excess of three million viewers per game.

Tickets for game one of the State of Origin series at Adelaide Oval go on sale at 9.30am on Wednesday from tickets.nrl.com/origin