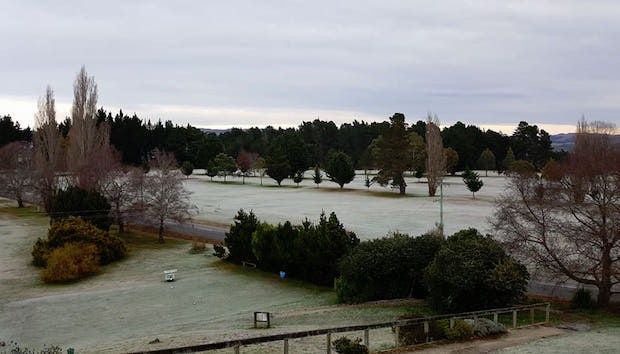 To say the air temperature was on the cool side of freezing would be an understatement, nevertheless a modest number of 27 turfies were welcomed by a warm fire and a hot cuppa at the Waikouaiti Golf Club last Wednesday as part of another STMA field day.

Overcast conditions followed a frosty night for the East Otago nine hole club with the mercury struggling to reach 0 degrees by 10am. The course remained frozen well into the afternoon.

Attendees were welcomed by stand-in president for the day John Humphries before a panel discussion themed “bring a plug” day took place.

Local agronomist David Howard was once again present to chair the discussion.

Common topics discussed again included worm control – with a wet 2017 embracing the southern region it appears most clubs are facing an increase in worm castings.

Some questioned the results vs product cost particularly within smaller operations, however clubs were reassured from trade representatives that timing of applications with the appropriate rainfall were imperative for a successful control.

David also mentioned he’d seen a lot more disease particularly in collars which he puts down to the lack of consistent frosts, ironic as members were glaring at an iced over golf course outside.

Attendees were also reminded to register for the upcoming Southern Fine Turf Seminar in Dunedin.

Programmes were available on site and John urged the small clubs to send their employees. Funding from the STMA was available for 9 hole clubs providing they were STMA members.

John Beattie then presented guests with a brief history of the club which dated back to 1935 over four locations.

The course currently resides next to an estuary and was formally a links course covered in lupin before the pine plantations took over. The current club house even sits on an old sand dune which overlooks most of the course.

At present the club leases adjoining land where there has been talk for an additional nine holes to be constructed.

The course had employed a fulltime greenkeeper up until 2013 but is now maintained by volunteers with two men allocated to each job.

Like many small clubs, Waikouaiti has a reliable firewood gang – their efforts have seen wood sold and new machinery purchased through proceeds.

The club has had to deal with many issues from pests to drainage and shading issues. John said the club used to control the wildlife (rabbits, ducks, geese) themselves until a fence was erected which seemed to help significantly.

The low-lying nature of parts of the course means that during heavy rainfall surface water is pumped off site.

The surface on the greens were outstanding as illustrated by the photos. Attendees got to see first-hand the surface close up despite still being frozen at 2pm.

It was clear the well uniformed greens are now seeing the benefits from the manual watering programme and an increase in topdressing implemented over the summer months.

The club recently went to sand topdressing after using soil right up until 2013. Club officials paid tribute to David’s guidance.

The next STMA gathering will be the Life Members Golf Tournament and 50th Anniversary celebrations on Sunday August 20th at the Otago Golf Club in conjunction with the Southern Fine Turf Seminar.