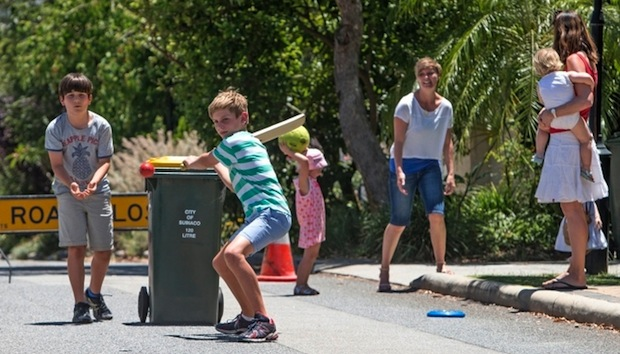 Cricket is my subject today and apart from the common-or-garden backyard variety, this column is about the most Australian form of cricket ever played – street cricket.

I absolutely loved it, despite an absence of more than 30 years.

A neighbour I have seen (but never spoken to) posted a letterbox note inviting my wife and I to a 4pm street party to round off Australia Day celebrations.

As you’d expect, there was a scrumptious barbie, nibblies galore and a variety of soft and hard drinks that would make England’s famous Barmy Army blush.

Then it was 5.30, sun sinking, kids restless. What happens next?

Australia, the best country on the planet, took over.

Two wheelie bins were put onto a straight section of our street. A bat and ball materialised from nowhere and someone yelled: “anyone wanna play some cricket?”

Up to this point, there had been little noise, but the impromptu chorus for a game of cricket was deafening.

Someone pointed out the dangers of cars coming up and down our makeshift pitch and what to do when the makeshift ump yelled “car-car-car.” Understood ump. We scatter.

But the cricket gods smiled on us all this Australia Day. Only four vehicles traversed our ‘pitch’ in almost two hours of bat and ball activity.

The players aged from two to 62. The bowling and batting quality was, to be brutally honest, terrible but the smiles on the faces – male and female – were fabulous. Contagious.

This was old-fashioned fun in a high-tech era that doesn’t know that fun doesn’t need to be electronic.

Little kids were shown by their dads how they could or should hold a bat.

Others were given some bowling pointers. Owzat? All were taught how to appeal with great zeal and enthusiasm.

The dads, with stubbies in hand, were mainly helping out as wickeys, friendly umpires and fielders. Some mums were asked to bowl a few balls, demonstrating this was a great game for all.

And it really was.

Plenty of air-swings, for sure, but some lovely lofted shots into the Ned and Zenka’s prized sunflower patch and one notable ‘boundary’ that all but reached the Newman’s carport by none other than Master Kai Newman, aged six.

I looked around and revelled in the sight of so many young girls and boys enjoying their very first cricket experience.

There was apprehension at first. Frustration over batting air-swings came second but when the bat eventually collected ball and everyone yelled “run, run run,” the joy on their faces was priceless.

I loved it. They loved it maybe more. No computer games here. No need for social media, or brain-dead TV shows.

Neighbour versus neighbour. Girl versus boy. To hell with age differences.

For many, this was an introduction to cricket and in the background, on Ned and Zenka’s beautifully manicured lawn, their parents were watching the action closely and smiling like never before.

The sun went to bed and the players reluctantly left the pitch, drifting back to their ‘normal’ lives.

It was a truly beautiful ending to my Australia Day.