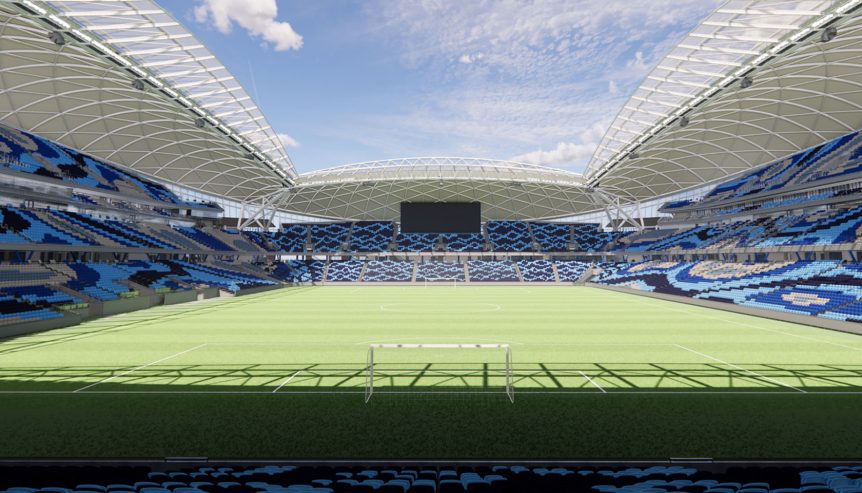 The seating design for Sydney FC’s new world class stadium at Moore Park has been revealed, as the Sky Blues new home continues to take shape.

It was created by award-winning Indigenous artist Tony Albert, and has the theme of ‘Two Worlds Colliding’.

Each end of the stadium is separated and distinguished by two different designs symbolizing land and water.

The land is signified by the geometric diamond designs taken from nature, while the bubble of concentric circles represent water.

The designs are abstract representations of Goanna (Gadigal) and Whale (Bidjigal) Totems, creating an element of friendly yet fierce competition.

Sydney FC Westfield W-League goalkeeper and Indigenous footballer Jada Whyman said she was excited by the artist’s work chosen for the design.

“It’s a fantastic opportunity to showcase an Aboriginal artist’s work on a large stage like this,” she said.

“I think it’s such a great idea to have the layout of the seating as an indigenous design.”

The artist hopes that the design will provide everyone who enters the new stadium with an engaging and beneficial experience.

“I believe in the ability that art has to elevate our experience of daily life, and to create environments that uplift and connect us,” said Tony.

“It is my wish that in time, the Sydney Football Stadium will become a landmark destination within Sydney’s Cultural Precinct.”

Continuing on the theme of the sporting battles that are planned for the ground, he said: “I was really thinking about this idea of a football stadium, and the concept Two Worlds Colliding is the idea of friendly competition, two different elements or people coming together,” he said.

“To have the seating design revealed brings us one step closer to completion and I’m excited,” he said.

“I think the design not only reflects all the great sporting battles to be held at the ground but provides a great nod to all the teams playing in shades of blue who will call this ground home.”

Construction of the Sky Blues’ new home continues with the concourse structure complete and structural roof steel being installed. Completion of the structure is expected this year ahead of the new venue’s opening in 2022.