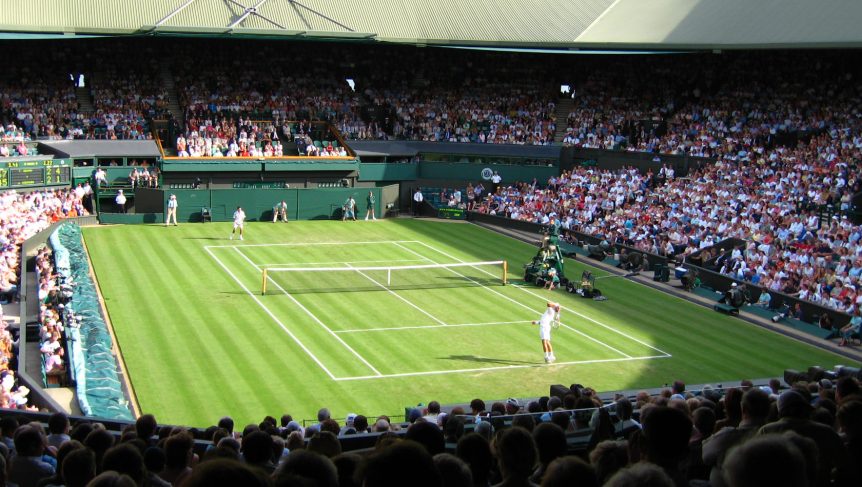 Nowhere in the world does a sward of ryegrass attract the attention of the world the way it does at The Championships, Wimbledon. But getting that grass to a playable point for two weeks of intense pounding requires year-long care. And with 18 championship courts and 22 practice courts at the All England Club, and nearly 100 years at the same venue, they know a bit about growing grass.

Every court receives some sort of a rebuild each year and the process of getting courts ready starts following the prior year’s championship, getting the court sward — a fancy term for an area of short grass — receiving a skimming of the top roughly 12 millimeters. Think of this as a severe balding.

“This removes all weak and weed grasses from the sward and it reestablishes the levels where play has worn the surface,” says Will Brierley, Wimbledon senior groundsman. Crews till a seedbed to lay new seed and fertilizer. It takes about one ton of seed each year. Covering the courts with a semi-permeable translucent growth cover for up to a week regulates heat and moisture. A program of mowing in the fall helps firm the surface and levels the grass before receiving a top-dressing of fine soil — about six tons total — and dragging to ensure the perfect leveling of the soil.

New in 2001, the All England Club switched from a mixture of 70 percent ryegrass and 30 percent red fescue to a 100 percent ryegrass for increased durability, as suggested by the Sports Turf Research Institute in Yorkshire, UK. The ryegrass contains up to three different cultivars to make for a dense sward with improved bounce.

Prepping for The Championships, Wimbledon intensifies in spring. A post-winter roll removes frost and a spraying program starts in April to help with plant growth, durability, color and root development. “The date of this is worked back from the tournament start date to enable us to maximize the application,” Brierley says.

“The tests will determine,” Brierley says, “how much irrigation is needed at the end of play to keep the grass alive and keep the court firmness at a playable reading.”

Early every morning, Wimbledon courts receive a mow from a Toro cylinder mower and marks from a wheeled machine that lays titanium dioxide 50 millimeters wide for the lines — 100 millimeters for the baseline. It takes 500 gallons each year to mark all the lines. And Rufus, a trained Harris Hawk, patrols the grounds to ensure pigeons stay off the lawns.

The practice courts get their care in the evening, allowing players to get on the courts early each day. All championship and practice courts receive the same level of car to give equal playability “as close to humanly possible” across the site. The only special need includes a machinery lift to get equipment onto No.2 Court.

On the middle Sunday no play is scheduled, barring extreme scheduling conflicts due to rainouts, and the grounds crew uses a machine dubbed the Billy Goat to essentially vacuum and clear off any kicked up debris from a week of play. Unlike the clay courts at Roland-Garros, the Wimbledon courts don’t receive any care during play, except to cover from rain as needed.

Such is the life of the world’s most famous lawn.