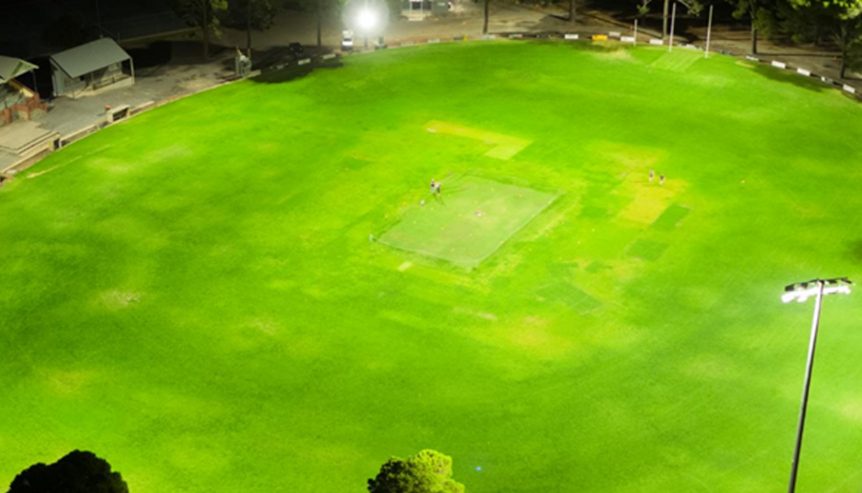 To achieve the project and future proof the whole facility, Council also upgraded the electrical capacity of the Park.

In total, the $742,000 project was made possible by The Barossa Council in partnership with the Office for Recreation Sport and Racing through Round 1 of the Grassroots Football, Cricket and Netball Facility Program.

Mayor Bim Lange says the addition of high quality lights will not only expand grassroots football and cricket competition but also attract premier sporting fixtures to the region.

“This is a win-win for our community, our sporting clubs and our local economy, creating more opportunities to play sport, promote sport tourism or visit the Barossa for events,” he said.

“Tanunda Oval is as much a community facility as a sporting facility so we see many more opportunities for broader community use too.”

Tanunda Cricket Club is one club reaping the benefits of the upgrade.

“This includes standalone A grade one day games along with more community style events, which are a great way for us to come together as a club and broader community,” Stuart said.

Economic benefits have also flowed to the region during construction.

Barossa company CSJ Electrical was awarded the lighting contract, with Director Craig Johnson describing it as a boon for the local community.

“We used all local employees and contractors to complete the project, providing benefits to the local community and its ratepayers,” he said.

Minister for Recreation, Sport and Racing Corey Wingard said it’s fantastic to see the project finished and benefiting the local community.
“This is what our Grassroots Footy, Cricket and Netball Facility Program is all about – partnering with the sporting codes and local councils to deliver worthwhile projects that help people stay active and healthy,” the Minister said.

“This lighting project also ties in with our new Game On strategy which is all about making it easier and safer for people to exercise more often and later in the day.”

For information on promoting events or fixtures at Tanunda Oval, contact Council on 8563 8328 or email barossa@barossa.sa.gov.au

Council hopes to hold an opening event for the lights and Show Hall later in the year.