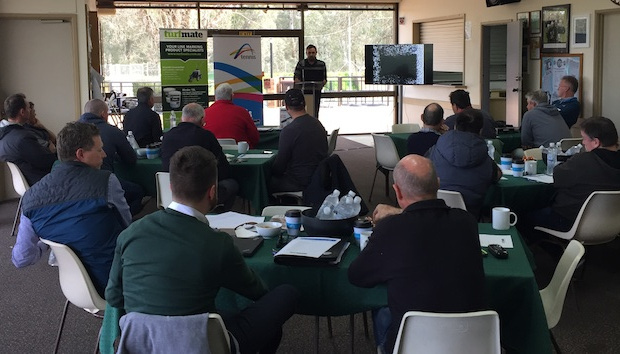 Grass courts make up 18 per cent of the tennis courts in Victoria, so last year Tennis Victoria created the Grass Court Network; a group for curators, maintenance staff and general volunteers involved in the management of grass tennis courts.

With the induction of the new group, came a new opportunity for a lawn club event, where members could share knowledge and ideas, in turn strengthening the grass facilities in Victoria.

Tennis Victoria Facilities Operations Manager, Ken Barton said the event was a great success, with more than 30 attendees from metro and regional areas making the trip to Shepparton.

“It was terrific to bring the forum to Shepparton Lawn Tennis Club, that has hosted Country Week, Australian Seniors Championships and Junior Davis Cups in recent years,”  Ken said.

The day included a Tennis Victoria introduction from Ken, a tour of Shepparton Lawn Tennis Club’s courts and grounds by Head Curator Ian Grose, and a talk from special guest and Senior Agronomist from Turfgrass Consulting & Research, John Neylan, who spoke to guests about thatch control on the courts.

Rob ran members through a few different methods for the job like laser machinery, double booms, paints and best practice for greening out lines with the Kombi 3.

There were also a couple of prizes up for grabs for winners of turfmate’s Tennis Trivia!

We gave away a brand new WORX 20V Blower to the biggest Tennis fanatic that could answer all our tough trivia questions, while the runner up scored a WORX Slide Driver!

After lunch there was an open panel discussion about the structure and future of Grass Court Network, where it was agreed an Advisory Group be formed from the ranks of greenkeepers, to provide advice and recommendations to Tennis Victoria Staff.

The third Grass Court Forum from the Grass Court Network was a grand slam success, one which turfmate were proud to be a sponsoring partner of. Ken said Tennis Victoria were also please with the success of 2016’s event.

“We have recevied some very positive feedback from attendees. The 2017 forum will be held at a similar time of year, at a venue to be determined.”

It’s great to see a small but significant sector of the industry banding together, and we look forward to next year’s forum!