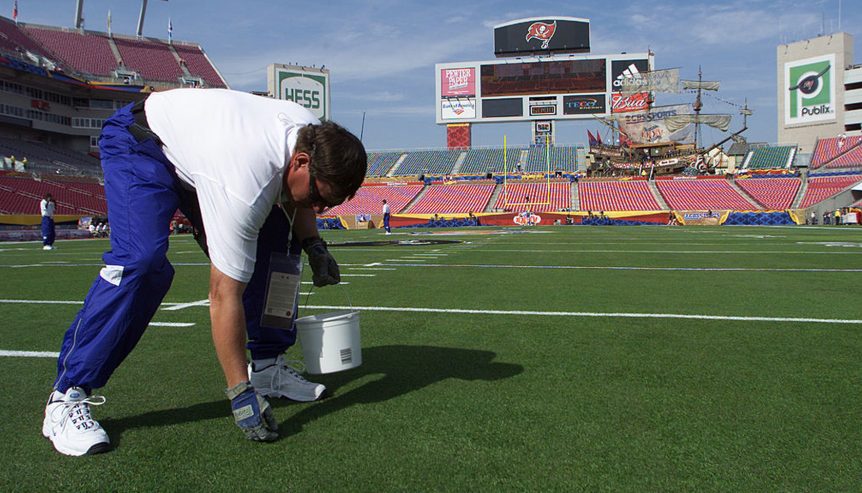 The NFL is full of unsung heroes. While quarterbacks, wide receivers, and pass rushers get all the headlines, plenty of people the average fan never hear about make the game what it is. One group that does this? NFL groundskeepers. Let’s take a closer look at this job that isn’t discussed much but is nonetheless very important to the NFL product.

The importance of good field conditions for NFL games

NFL fields – which include the fields at all 32 stadiums as well as each team’s practice fields — need consistent and effective upkeep. If the fields have poor conditions, the players risk injuries to their feet and legs. Shoddy turf can cause a player’s foot to get stuck, forcing them to trip and possibly injure themselves.

How important is it? Last season the NFL was set to have the Los Angeles Rams play the Kansas City Chiefs in Mexico. This represented a major event for the league, as it was a regular-season game played internationally. Unfortunately, the field conditions were so poor, the NFL had to move the game to Los Angeles.

If the league will move an important game rather than play it, that shows how much value the league places on having good field conditions.

The standards of play for NFL stadium fields

Each week, NFL stadiums must meet a certification with specific standards to be deemed good enough to play on. Sports Illustrated interviewed Andy McNitt, the man in charge of testing the fields and Penn State’s director of its Center for Sports Surface Research. Here’s how he tests the hardness of each field:

“That process includes using a Clegg Gmax 2.25-kilogram hammer to drop weight from a given height to measure how quickly the weight stops on impact. Using the instrument, NFL fields must fall under a 100 score everywhere on the field. If one doesn’t, remediation must happen before a game can be played. Most fields range in the 80s, with the occasional test in the 70s or 90s. Natural-grass fields can soften into the 60s following rain.”

Groundskeepers play a critical role in making sure all standards can be met.

The role of NFL groundskeepers

How much do NFL groundskeepers get paid?

According to Careertrends.com, NFL groundskeepers can expect pay commensurate with a typical landscaper.

Bureau of Labor statistics state that the average groundskeeper salary (for all groundskeepers, not just NFL team employees) is about $11.13 an hour, which comes out to $23,150 a year based on 2,080 hours worked. The highest ten percentile of groundskeepers make $17.57 an hour, or $36,545 per year.

These numbers are likely higher for NFL groundskeepers due to the long hours they no doubt work but are probably comparable.