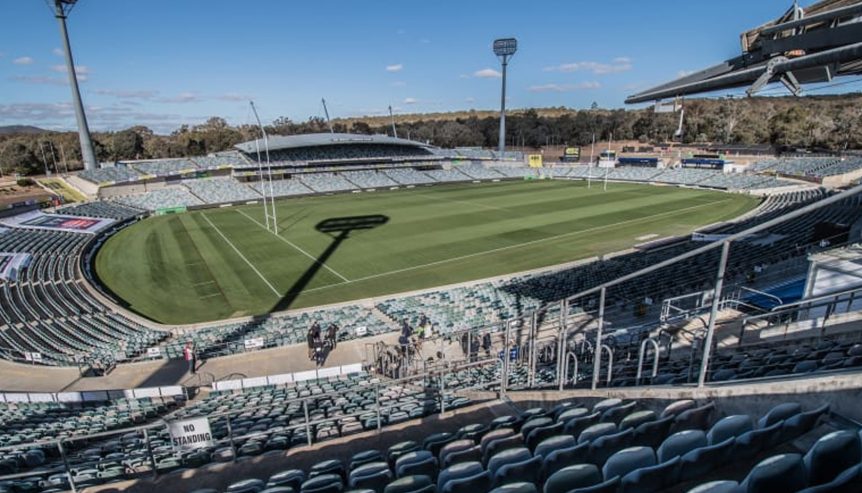 Treasurer Andrew Barr revealed the territory was in talks with the Commonwealth about buying the stadium, and could even make its move within this term of government, as he handed down Tuesday’s budget.

About $1.3 million will be spent on improving Canberra Stadium this year, and up to $3.7 million over the forward estimates.

The work will include upgrading player and officials match rooms to meet the territory’s guidelines on facilities supporting women’s participation in sport, new turf and a new electronic scoreboard and video replay screen for the 2020 football season.

“Greg Hunt has rung me and talked through some broad terms around how an asset transfer would occur,” Mr Barr said.

“That was encouraging, the Commonwealth are not expecting us to pay anything much up front to acquire the asset because effectively you’re acquring a liability, the asset is the land.”

The government would look to develop a precinct around the Belconnen stadium. Mr Barr flagged also some sort of “profit share” arrangement for the stadium’s redevelopment.

“To be blunt there’s nowhere for people to eat or drink or do anything really outside of that precinct so if you were to redevelop there you’d need to build a precinct around it,” Mr Barr said.

However he said a city stadium could still be on the cards.

“It will be 50 years old in 10 years time, having had that refurb for the Sydney Olympics. That tells me a decision will need to be taken earlier than the 2020s on whether to build a new facility in that Bruce precinct or go with the CBD stadium,” Mr Barr said.

“Every public transport in Canberra leads into the city, there’s 30,000 car parks already here and there is probably the widest range of choice for pre- and post-match entertainment so you could benefit a lot from the events you stage at the city stadium. They’re the balancing questions for us but in the end, if we, the territory government, are going to invest in such an asset, we’ll want to own it and own the land so it can be capitalised rather than it being a recurrent expenditure.”