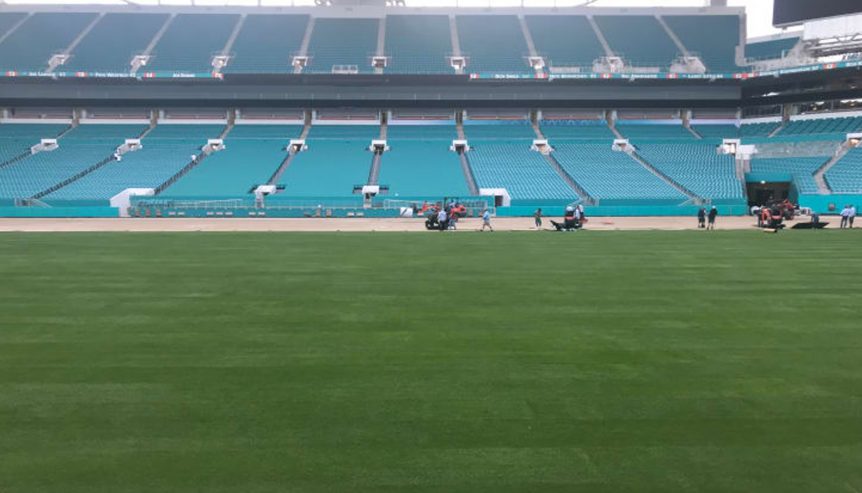 Miami’s Hard Rock Stadium will host about 65,000 fans on Super Bowl Sunday. While the biggest battle in football will last just one evening, the fight that stadium faces from the effects of climate change will go on indefinitely.

It is not alone. Teams and stadiums across country are dealing with flooding, extreme storms, excessive heat and smoke from wildfires.

“The last three years in September, we’ve had climate issues, whether they’re hurricane threats. We had to actually move a game,” said Tom Garfinkel, CEO of the Miami Dolphins football team. “We’ve had lightning strikes that we’ve never had in 30 years here, where we had to delay a game. It was the longest game in the history of the NFL.”

The Dolphins paid $500 million to renovate the open-air stadium, just in time for Hurricane Irma in 2017. Then in 2018, a random rainfall caused the field to flood during a college game at the stadium.

And that’s just one stadium. In Florida, the sports industry contributes $57.4 billion and 580,000 jobs to the state economy annually, according to a 2017 survey by the Florida Sports Foundation. It is home to 10 professional sports teams, 26 minor league teams and 60 college sports programs.

“The Arena will begin to flood with only two feet of sea level rise. I’m talking 20 years or less,” said Henry Briceno, a professor at Florida International University who studies the impact of climate change on water. He expects a similar fate for the Hard Rock Stadium at a three feet rise, and said he was appalled to hear that a Major League Soccer expansion team, backed by soccer icon David Beckham, is proposing a new stadium be built near the Miami airport.

“I don’t know if those guys know that they are building in the future Atlantis,” said Briceno.

The risks extend far beyond Florida. In San Diego, the Padres’ Petco Park flooded in 2017, while Western Michigan University’s football stadium was overwhelmed last June, when record rainfall turned it into a massive swimming pool. At Davenport, Iowa’s minor league stadium — Modern Woodmen Park — overflowing rivers last May turned it from a field of dreams into an island.