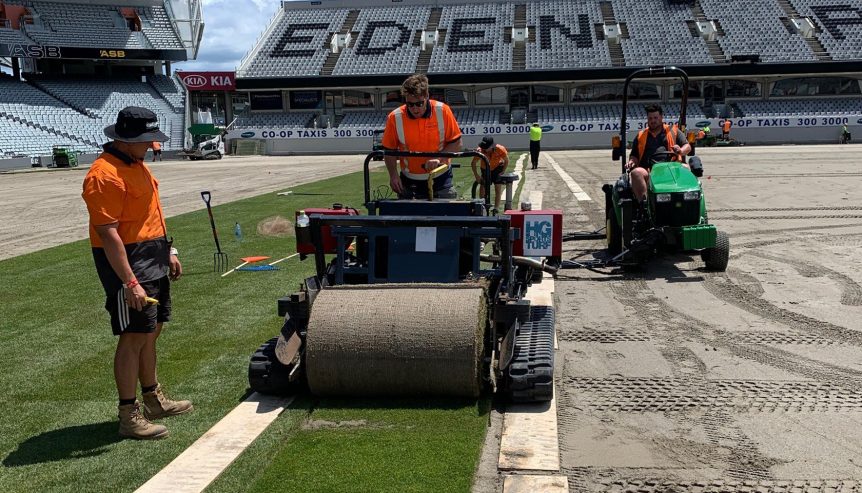 After 17 years of history, the hallowed turf of Auckland’s Eden Park Number One field has been replaced.

Mexteds was also involved in the initial survey, design work, and using its automated machine control on the project.

Throughout the process industry best practice has been followed, with excavators used to remove the old surface to minimise the amount of waste material.

Mexteds’ Managing director, Cameron Mexted, says, “We needed to remove all the old Motz turf, but also minimise removing clean sand beneath it – this was a big consideration throughout our planning and execution of the works.”

Mexteds then 3D-levelled the subgrade to mimic the final design levels, before importing around 800 tonnes of new sand.  The new sand was then 3D-levelled, combined into the underlying sand and consolidated.

In February Mexteds’ crew returned to Auckland to assist Australian company HG Turf Group in laying the new surface. The product had been grown over the last 10 months at Eden Park’s Turf Farm at Karaka, south Auckland.

HG Turf Group’s managing director, Hamish Sutherland, says the resurfacing of Eden Park was a great success and a credit to all involved.

“Mexteds was a key member of the team, taking the lead in 2020 when COVID threatened to disrupt the project. Mexteds’ ability to investigate and design the works meant the project was well defined and planned from the outset.

“Under COVID restrictions we were limited to one harvest manager and one installation manager from Australia. Never before have we resurfaced a stadium with only two from HG. After completing managed isolation, we upskilled the local crews to operate our specialised equipment and then transferred our know-how via on-the-job-training.

“For us at HG Turf Group it was one of our most rewarding projects, because seldom have we collaborated with like-minded companies on such a high-profile job, and never before have we helped create such a legacy.”

Eden Park’s Turf Manager, Blair Christiansen, says bringing this project to life, including coordinating local and international contractors, has kept his team on their toes.

“Farewelling our previous turf and welcoming HG Hero Eden Park Edition has been a project years in the making. With many logistics, equipment and contractors required, it has been a collaborative effort to ensure we deliver the best possible outcome for New Zealand’s national stadium.”