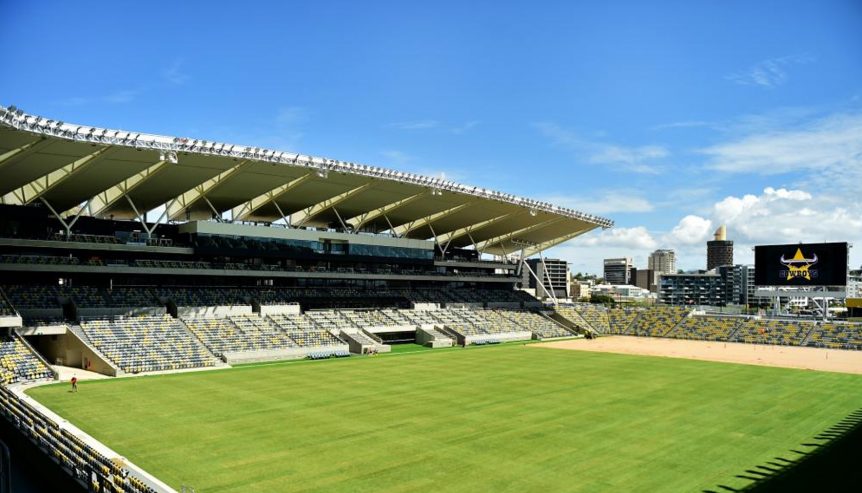 The head groundsman for the new stadium has literally been watching grass grow for the past six months.

The turf – a mixture of artificial and real grass called Eclipse and grown in a single plot at Gumlow – was finally laid on the dirt inside Queensland Country Bank Stadium this week.

The playing surface itself is natural grass, but has an underlying mesh of artificial fibres to create a vertically and horizontally stable and perfect pitch.

Head groundsman Bruce Fouracre worked the grass at the 1300 SMILES stadium for almost 12 years, and said he’d been a “regular visitor” to the turf farm.

“It has been very interesting watching the new surface being planted and established,” he said.

“I’ve been a regular visitor to the turf farm to learn all I can, and now the new profile and turf surface is down, HG (Sports Turf) will be assisting us with the initial maintenance regimes.”

INSIDE THE NEW HOME OF THE COWBOYS

He said the opportunity to work on the new stadium was exciting, and a chance to learn new skills and be involved in something big for the community. The full mow of the new surface grown at Fortnis Turf Farm is expected to take an hour and a half. Mr Fouracre is keen to try out some of the new gardening toys.

“I’m definitely looking forward to having a brand-new irrigation system, as well as some new equipment, including a new mower, an aerator, and a more spacious shed which we’re pretty happy about,” he said.