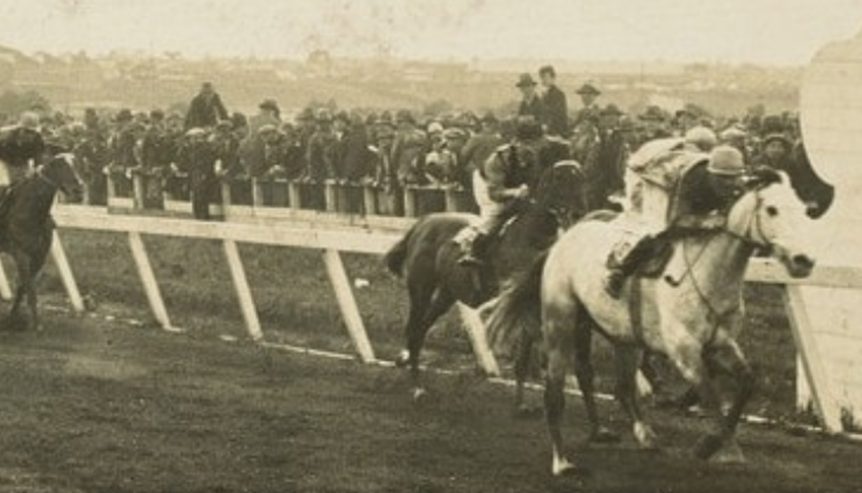 Melbourne had an incredible variety of racecourses from its earliest days until World War II, when the Victorian government deemed that the metropolitan area should only have four racetracks.

Flemington, Moonee Valley, Caulfield and Sandown Park survived, but racecourses were once dotted right around the metropolitan area.

Some were little more than bush tracks. Others were well established courses with grandstands and modern facilities. Some were operated by racing clubs, and some were privately-owned proprietary tracks. Thoroughbreds raced on some courses, while those of mixed stock known as ponies galloped at others.

But the prominence of racecourses around Melbourne showed that racing was once first past the post in our city’s sporting culture.

Melbourne’s first racecourse was on Batman’s Hill on the site now occupied by Southern Cross railway station and the rail yard west of the CBD.

Its first meeting in March 1838 predated Flemington by two years. The starting post was near present-day North Melbourne railway station.

Racing at Williamstown began in 1859. Years of lobbying for a racecourse in the area finally bore fruit just days after a Williamstown horse, Flying Buck, won the Australian Champion Sweepstakes at Flemington.

At first, there was one race meeting a year at the new course on the banks of the Kororoit Creek (on Boxing Day) but by 1865 a wider calendar had developed. The Williamstown Racing Club was established in 1868.

Floods in 1902 and 1918 caused meetings to be moved to Moonee Valley and Caulfield.

Even the great Phar Lap ran at Williamstown, winning the Underwood Stakes there in 1931.

The racecourse at Williamstown was used by the state government to house displaced war veterans and migrants. Today, the site is the Altona Coastal Park. Racecourse Road leads to the park.

Ascot was a privately operated racetrack that was bounded by Union, Ascot Vale and Maribyrnong roads in Ascot Vale.

Its first race meeting was held in October 1893, much to the chagrin of 122 local residents who petitioned Essendon council to scotch the proposal because of the number of courses already in the area and their fear an influx of undesirables might reduce their property values.

John Wren purchased the track in 1906 and offered the track for military use in 1915, sparking an immediate call from opponents to have the track’s licence to operate as a proprietary racecourse revoked.

Ascot was again taken over by the Commonwealth for military use in WWII, but racing did not resume there after the war, with the state government compulsorily acquiring the 31-hectare site in 1946 for £117,000 for use by the Housing Commission. Wren valued the site at £174,000 and took the government to court, but the government settled and met Wren half way at £142,000.

This old proprietary racecourse was the home of the Mordialloc Racing Club. It was established in 1887 by Alfred Bradshaw and was known as Richfield in an area near present-day Boundary and Springvale roads in Braeside.

The course was not a financial success, despite a spate of meetings held there, and it closed in 1889.

The Epsom racecourse at Mordialloc began its racing program in June 1889, the year Richfield closed.

The picturesque course boasted a clock tower, fountains and lawns, with views to Port Phillip and the Dandenongs and rooms for the jockeys, stewards and committee members.

The course was later taken over by the Victoria Racing Club, which shut the track with around 40 trainers still resident there in 1997.

The Mentone Racing Company was established in 1888, and the course was built on around 60 hectares of land in an area north of Lower Dandenong Road.

The first races were held there in September 1888, with several thousand patrons filling the grandstand and milling about under shady trees.

Like nearby Epsom and Aspendale, the Mentone Turf Club lost a number of meetings when the Victoria Racing Club reduced the number of race meetings around the state.

But it survived through World War II, where many clubs did not, because of the good condition of the facilities and the club’s willingness to make the track available for other racing bodies to use.

Like the tracks at Mordialloc and Mentone, the Aspendale track was handy to the beach and the water for trainers to take recovery sessions and its sandy loam was not hard on the horses when they raced.

The complex included a large and well planned “pleasure garden” for patrons to stroll through, with jockeys Mick O’Brien and Bob Ramage, who each rode Carbine to victory in the 1889 and 1890 Melbourne Cup, involved in planning the new track.

It opened in April 1891 and quickly also became a popular spot for picnickers and holiday makers with a steady stream of vendors selling fruit, ice cream and other treats by the turn of the century.

The track finally closed in 1931, despite objections from many trainers and the Aspendale Racing and Coursing Club, at the same time Sandown Park and several other tracks disappeared around town.

There were two tracks known as Fitzroy, and neither of them were in Fitzroy.

Another proprietary course was Croxton Park in Thornbury.

It was operated by the Fitzroy Pony, Galloway and Trotting Club and became known as the Fitzroy racecourse.

The Pilgrim Inn in High Street, Thornbury, was established in 1844. A later licensee, Josiah Goyder, painted the building red and renamed it the Red House Inn in 1865, developing a racetrack behind the pub. In 1869, Charles Hitchens took over the pub and renamed it the Croxton Park Hotel.

The first race meeting was held there in October 1865 but the racing had a reputation for poor quality.

A judge at the track was Victoria Police Chief Commissioner Frederick Charles Standish, a notorious gambler.

The Croxton Park track did not last long. Its final meeting took place in July 1873.

Racing didn’t return to the area until almost 20 years later.

The new Fitzroy racecourse was on the west side of St Georges Road, between Woolton Avenue and Gadd Street. And it had a special place in racing history.

It was initially known as the Croxton Racecourse, capitalising on the notoriety of the old Croxton Park track, and was established in February 1892 by two entrepreneurs named Byrne and Callahan.

The track was around 2500m long and had a grandstand for 500 people.

The White Horse Hotel was built on the corner of Whitehorse Road and Elgar Road in Box Hill in 1851, complete with a white wooden horse on its roof.

A racecourse developed nearby, a short distance from the railway station, and it was here that jockey Bob Ramage, who rode Carbine to victory in the Melbourne Cup of 1890, rode his first winner.

St Kilda’s Peanut Farm Reserve in Blessington Street was home to a racecourse from 1847 to 1868, and hosted the annual St Kilda Cup.

Just down the road, at Brighton’s Elsternwick Park, another racecourse operated between 1882 and 1891.

Its grandstand was dismantled and re-erected at the Junction Oval for the St Kilda Cricket Club.

The old Richmond racecourse was in an area bounded by Bridge Road, Stawell Street and Westbrook Terrace, just west of the old Channel 9 studios in Bendigo Street.

The tiny trotting course was only five furlongs (a tick over 1000 metres) long.

It was established around 1892 and was operated by the Richmond Pony and Galloway Club before it was purchased by John Wren in 1906.

Wren faced the closure of his totaliser and bookmaking businesses the following year because of new anti-gambling laws that also banned betting at tracks of less than six furlongs.

Miraculously the track was exempted from those laws by amendments pushed through by Premier Thomas Bent, but the amendments also limited Wren’s weekly events at Richmond, Fitzroy and Ascot to just 16 each a year.

The St Vincents Place area of Albert Park was a racetrack during a period in the 1850s.

The village of Heidelberg boasted one of Melbourne’s earliest racecourses and was located on the Banyule Flats near the Yarra River within the present-day Warringal Park.

Races were held there generally between February and May from 1853 until 1882, with three races held at an Easter sports carnival in 1888.

William Samuel Cox, who later opened the larger Moonee Valley track and for whom the Cox Plate is named, opened the Kensington Park course in 1874 in an area just north of Kensington railway station.