Introduction
When the 2019 Rugby World Cup was awarded to Japan one of the main concerns of World Rugby was the ability to provide world class surfaces for the 12 match plus 54 training ground venues. Labosport was commissioned by World Rugby in 2016 to help ensure this goal was achieved. Our role included multiple visits to and testing of all venues, preparing development plans for a few problem venues, participating in planning and monitoring meetings for key grounds as well as venue sign-off.

Collection and analysis of playing surface performance data was a fundamental part of our assessment and planning for the RWC.

How testing was conducted

As for the 2015 Rugby World Cup in the UK, the Scoreplay system was used as the basis for testing the venues in Japan.
A full inventory of data was collected from each venue, including:
• Surface traction (short and long sprigs)
• Root zone shear strength (possibly the most relevant data)
• Surface hardness using AAA and Clegg hammer
• Surface energy restitution using AAA
• Critical fall height (indicator of concussion risk)
• Root depth
• Soil health
• Infiltration rate
• Turf cover percentage
• Turf health and colour (including use of NDVI technology)
• Soil moisture content and uniformity of soil moisture. 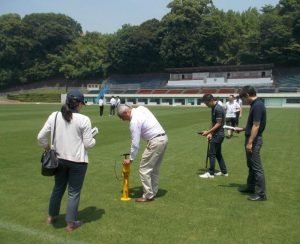 In excess of 250 site tests were conducted during the lead-up to the RWC.

How data was used
For each venue data was processed and a summary provided to both the Organising Committee and venue management.

Feedback suggests the objective playing surface performance data offered numerous benefits, including:
• We were able to rationally describe to venues how their surface was performing at the time of the visit in relation to the standards set for RWC 2019.
• From World Rugby’s standpoint test results related to player safety (such as the Head Impact test) were most critical, especially where temporary field extension
areas were used. 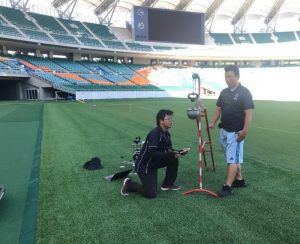 The HIC (Head Impact Tester) is considered an essential test for sports such as rugby and AFL.
• Performance data helped direct maintenance programming. For example, we could advise on the type and frequency of the soil cultivation program based on the
infiltration rate and root depth findings.
• Data collected over time from the same venue enabled benchmarking of performance to see if the surface was heading in the right direction. We were in fact
very impressed by the improvement made over the 3.5 years of monitoring.
• Performance testing data was used as the basis for signing off venues as fit for use.

For the host venue and the Organising Committee being presented with a report that provided objective and meaningful data on the performance of their playing surface aided decision-making. For example, decisions on investment in upgrading a surface were made easier where data showed the venue wasn’t performing to the required standard.

Relevance in Australia
Many of our leading venues are routinely collecting playing surface performance data and using this data for reporting and planning purposes. For example, the Scoreplay system is regularly used at several major sports venues in Australia to benchmark performance.

It would be fair to say that there is significant difference in the testing methods used at different venues. For example, although using the 1st drop value for the Clegg hammer has been the norm here for a number of years (and is the ASTM standard), there has been recent suggestion that taking the 2nd and 3rd drop values may offer useful data on sports injury risk. As an aside a device known as the Advanced Artificial Athlete (AAA), which we use on a regular basis, is recognised by the likes of FIFA and World Rugby as the preferred testing tool for indicating player-surface interaction.

The AAA is considered the benchmark tool by the likes of FIFA for measuring shock absorption and energy restitution.

There is no problem in each venue having different testing tools and methods of performance testing (e.g. different types of moisture meters). Arguably the most important thing is to benchmark values over time in order to identify trends at the same ground.

However there are likely to be problems if data from one venue is to be compared with data from another venue, or if prescribed performance standards are set by a user group. From World Rugby’s standpoint two of the most relevant tools we used in Japan were the Head Impact Criterion (HIC) and the Shear tester. Both these tools are not widely used in Australia and perhaps should be considered.

The HIC unit is a critical tool for identify the potential for head injury or concussion in the event a player’s head strikes the surface. World Rugby and AFL both rely on this test for accrediting synthetic turf surfaces for use. We have found the device just as valuable for natural turf, and are making the test part of our routine Scoreplay testing in Australia.

When presenting our performance testing results in Japan we included the variance of data as well as the mean value. Variation in readings (e.g. moisture content) across a field can paint a clearer picture of performnce, and we urge Australian stadiums to consider including variance data when reporting on performance testing. 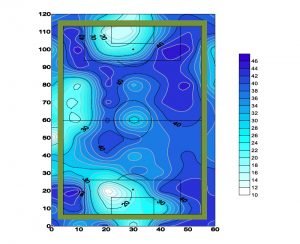 Example of variation in moisture content across a sports field.

Summary
Our work in Japan, combined with other Scoreplay data we have on file from over 200 venues globally (including 30 from Australia), represents an excellent database for determining standard limits for the different parameters. The information we have on football surfaces, along with benchmarked data for other sports such as cricket, will be made available to the Australian sports turf industry in due course