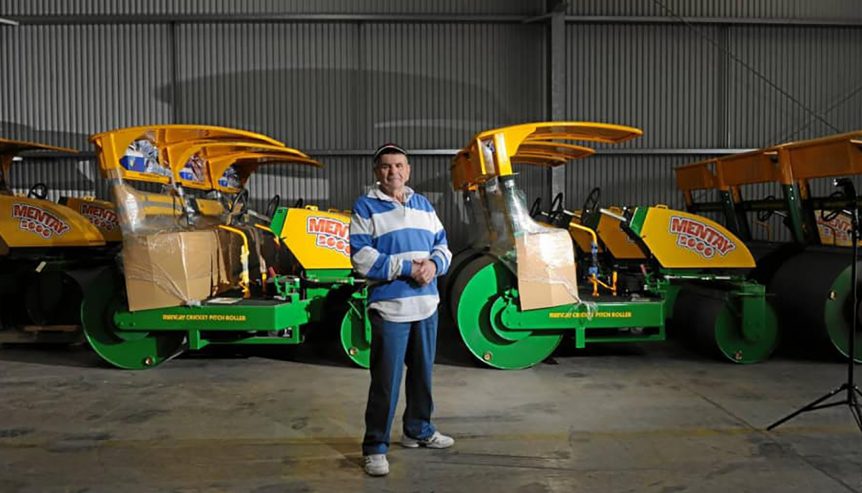 This week, the turf industry was sad to lose one of its most respected figures, with the passing of Maurice Menhennet of Mentay Steel Fab Constructions.

Maurice is synonymous with the success of Mentay, as the founder and developer of the original Mentay Hydra-Glide Walk Behind Cricket Pitch Roller, but he was also a real character who will be fondly remembered by everyone who knew him.

In the words of turfmate’s Rob Jenkins, “Maurie was a true gentleman of the industry and did so much for the game of cricket and the turf industry as a whole.

Mentay first began with Maurice’s signature entertaining nature back in 1973 – a dare between him and the Ballarat Cricket Association’s, Rex Hollioake. Maurice was spending his days repairing cricket pitch rollers from his factory in regional Victoria, some of which he had realised were extremely poorly designed. When discussing this with Rex, Maurice told him that he believed he could build a cricket pitch roller far better than anything Rex could currently buy on the market, and Rex dared him to prove it. And, as they say, the rest was history!

Seven years after the initial bet, Mentay’s Hydra-Glide Walk Behind Cricket Pitch Roller won a highly coveted Australian Design Council Award. If Maurice hadn’t already proven himself to all those who were using his product, this was the official confirmation he had successfully completed Rex’s dare. Even today, Mentay’s continued innovation with new iterations of the roller, as well as the faithful original can be found at most major grounds around Australia, and even further afield in New Zealand, Asia, South Africa and the UAE.

Maurice will be remembered for his humour, innovation, love of fishing and the immense and enduring impact he has had on Australia’s cricket wicket industry. Our condolences go out to Maurice’s wife, Maureen and the entire Mentay team.