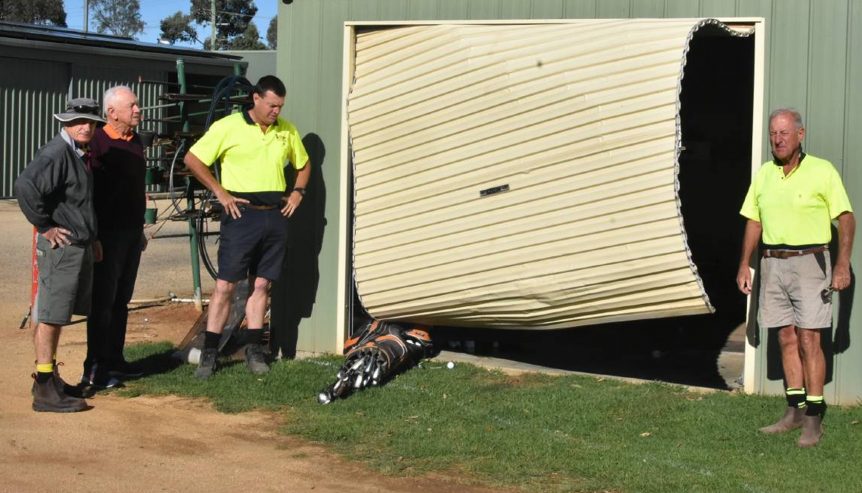 Thieves have struck at the Cowra Golf Club for the second time in one week and fifth time in the past two months.

On Wednesday morning staff arrived at the golf club to find sheds containing members’ golf karts and golf clubs had been broken into for the second time this week.

Six roller doors to sheds at the club were extensively damaged in the latest attack and three karts belonging to members are missing.

A number of bags containing golf clubs are also missing.

Members store the clubs and karts at the club “at their own risk”.

It is unknown if any of the items are insured.

The golf buggies are conservatively estimated to be worth at least $5000 each.

“If the carts are driven into the river you’re looking at $15,000 grand in damage there,” club member Terry Johns said.

“We could be looking at $30,000 worth of damage from Sunday night through until today.

Mr Johns said the items taken, like a bright orange driver owned by one member “aren’t something the thieves are going to be able to hide”.

“For want of a better word it’s just malicious, it’s not for profit, they’re not running around selling this stuff for Ice, it’s shits and giggle that they’re doing the whole thing for.”

Fellow member Terry Winwood-Smith said “we can’t keeping going on like this, its reached a point where something has to happen”.

The golf club is holding a meeting with members and Cowra police at the club tonight to discuss the break ins.