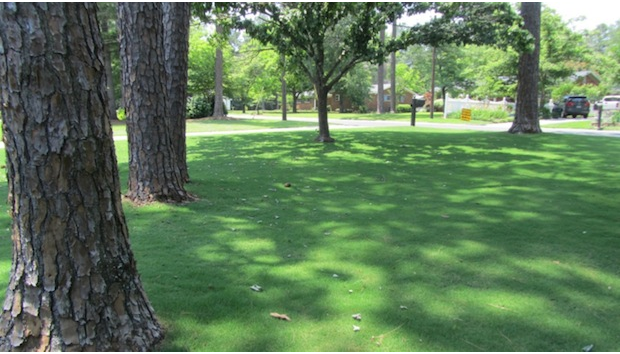 The Turfgrass Group has been named the licensing and marketing agent for TifTuf Certified Bermudagrass, (experimental name DT-1), the new drought tolerant turfgrass developed by a team of researchers led by Drs. Wayne Hanna and Brian Schwartz at the University of Georgia in Tifton.

TifTuf has been in testing at the University of Georgia since 1993, and was selected for release from a pool of more than 27,700 potential cultivars because of its extreme drought tolerance and high turf quality.

“I’ve seen the potential in this grass since 2009,” which was the year Dr. Brian Schwartz came to the University of Georgia as a turfgrass breeder.

“That was a dry year and I remember TifTuf keeping its green color while a lot of the other grasses were turning brown. That was when I began trying to figure out why it was so drought tolerant,” Schwartz said.

“After three more years of field research in two different soil types, we found evidence that TifTuf was using less water than Tifway 419 and TifSport.  This was exciting because initially we believed it might just have a deeper root system capable of extracting more water.  But instead, it seems that it’s just using less of the available resources.”

• Performs Best Under Drought Stress: TifTuf generally has superior turfgrass performance than many other cultivars (including Tifway, Celebration, and Princess-77) when subjected to short- and long-term periods of drought across the country

The release of this grass is especially significant at this point in time, said Ken Morrow, co-founder of The Turfgrass Group. “With the extreme drought conditions being experienced in California, and around the United States, there has never been a greater need for a drought tolerant grass like TifTuf.

We know it will create sustainable, environmentally friendly lawns, sports fields and golf courses around the country that use significantly less water than other grasses available on the market today,” Morrow said.

The Turfgrass Group is an affiliated company of New Concept Turf, named by UGA as the exclusive license holder for TifTuf. The company is owned by well-known and respected Georgia turfgrass industry professionals Ken Morrow, Ben Copeland, Jr., and Aaron McWhorter.

“New Concept Turf, along with their licensing and marketing agent The Turfgrass Group, was selected as the exclusive license holder for TifTuf Bermudagrass for a number of reasons, including: their comprehensive, nationwide business plan for reaching as many customers as possible for TifTuf; dedication to assuring a quality product; an aggressive marketing and production schedule; and proven success as an exclusive license holder for TifGrand bermudagrass,” said Shelley Fincher, licensing manager for the University of Georgia Research Foundation.

“The Turfgrass Group, as their licensing and marketing agent, was a critical component of our decision to license New Concept Turf because of their expertise in sublicensing, overseeing quality turfgrass production, marketing, and reporting sales to the UGA Research Foundation. ”