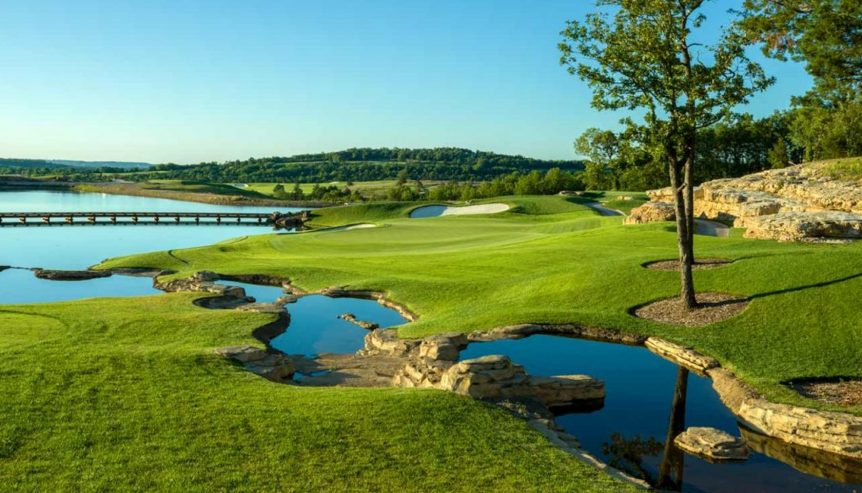 Tiger Woods is known for intimidating players. He doesn’t want his golf-course designs to have the same reputation.

Woods’s imaginative work at Diamante, in Los Cabos, Mexico, and Bluejack National, near Houston, adhere to that mantra. So, too, does his first public design: Payne’s Valley, at Big Cedar Lodge, in the Ozarks.

“I want to see a lot of birdies made here,” Woods said last week on what was his third visit to the course, which is scheduled to fully open this spring. “I have always felt that golf is about bringing people together and this has served as my inspiration to design fun and playable courses.”

The course, which is named for the late Payne Stewart (an Ozarks native), has nine holes grassed and ready for play and a second nine under various stages of construction. The hole yardages and pars are still a work in progress.

As Woods sees it, there are three basic tenets to his fun-comes-first design philosophy.

“I have wide landing areas, open green fronts, and tightly mowed green surroundings,” he said. “Wide landing areas off the tee means less lost golf balls, making the game more enjoyable and helping to speed up play. Open green fronts allow for golf balls to be bounced up onto the greens adding to the available shot options and giving shorter hitters an alternative to the high shot with lots of spin.” A view of the 1st hole at Payne’s Valley.

Case in point: the drivable par-4 3rd at Payne Valley, which has a sprawling landing area and no water hazards; Woods positioned the hole early in the round to give players a chance to get off to a good start. Or the risk-reward par-5 4th, which also has plenty of room off the tee. Players will have a chance to get home in two at the 4th, although the second shot will make them think: There is a creek running across the fairway in front of the green and a lake to the left. The next hole is a stunning island-green par-3, one of few spots where a wayward tee shot can result in a lost ball.

“A lot of people keep score by how many balls you lose in a round, hopefully not too many here,” said Byron Bell, president of Tiger Woods Design and Woods’s childhood friend.

The fun extends beyond the 18th hole. Owner Johnny Morris dreamed up a par-3 19th hole (ideal for settling bets) that is backed by a dramatic cliff face. A view of the beautiful 4th hole at Payne’s Valley.
Courtesy