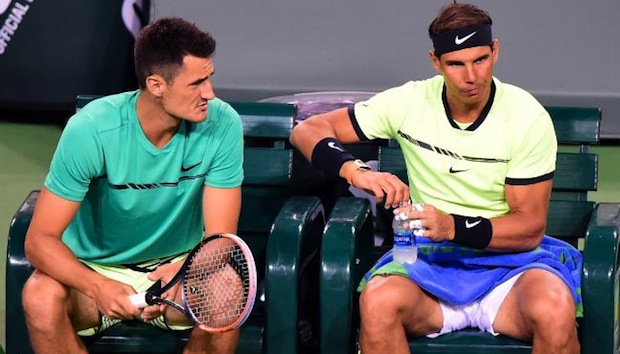 Bernard Tomic has all but closed the door on helping Australia reach their first Davis Cup final in more than a decade as he focuses solely on arresting his dramatic rankings slide.

Even after suffering his fifth successive first-round exit, a defiant Tomic maintains he can push for a place in the world’s top 10 — and that means there’s no room in his schedule for Davis Cup.

The 24-year-old boycotted Australia’s first-round win over the Czech Republic due to a family funding feud with Tennis Australia before also missing this month’s quarter-final triumph over the USA.

Breaking his months-long silence on the issue, Tomic said he was “not really” interested in making himself available for Australia’s semi-final against Belgium in September.

“Don’t get me wrong, Davis Cup is an amazing event and it’s a huge thing for us in Australia, but it’s not my priority right now,” Tomic said after falling 6-1 7-6 (7-3) to Diego Schwartzman in the opening round of the Monte Carlo Masters.

“My priority is to get back into the top 20 in the world and push for the top 10.” While Hewitt will back Jordan Thompson to serve as his No.2 singles option behind spearhead Nick Kyrgios, being without Tomic as Australia bid to make the Davis Cup final for the first time since beating Spain in 2003 is a blow.

Tomic’s only four defeats in 21 singles rubbers have come at the hands of Roger Federer, Andy Murray, John Isner and Florian Mayer on clay as a teenager. “I wish them the luck,” Tomic said.

“My priority now is getting into the top 10, back to the top 20 in the world, so I have to work hard, and once I settle myself, I can think more about playing Davis Cup.

“I played so much Davis Cup in my life that it’s just something that I’m not motivated for.”

Tomic, who missed the recent Miami Masters with a back injury, has not won a match since reaching round three at the Australian Open in January. He will play in Barcelona next week and then Istanbul, Madrid and Rome before the French Open.